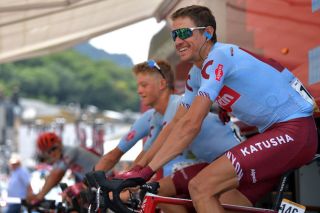 Katusha-Alpecin's Pavel Kochetkov warms up ahead of stage 9 of the 2019 Vuelta a Espana (Image credit: Getty Images)

Katusha-Alpecin's Pavel Kochetkov will join up with current team leader and Russian compatriot Ilnur Zakarin at CCC Team for 2020 after signing a two-year contract, his new team has announced.

Kochetkov joins the Polish WorldTour outfit following six seasons with Katusha, and said that Zakarin's move to CCC was one of the deciding factors for him.

"CCC Team is an ambitious project, and I like the look of the team and the organisation, so this was what attracted me to them," Kochetkov said in a press release.

"I've raced a lot with Ilnur Zakarin, so this was also a big reason to join him in moving to the team. I will support him, and he trusts me, so I hope to help Ilnur race well in the next years, as well as working hard for the whole team. I'm really looking forward to starting the next season with CCC Team," said the 33-year-old, who won the Russian road race championships title in 2016.

"After six years at Katusha-Alpecin, I want to thank [team owner] Igor Makarov for his passion, for everything he did for me personally, and for allowing me to be part of the team, and for cycling in general," Kochetkov continued.

"Personally, I see this as a chance to re-start my career. I think a change will be good for me, as I want to continue to grow as a cyclist and be better than I have been in the last years, especially as I have had some bad crashes during this time. I'm motivated and I'll do my maximum for the team," he said.

CCC manager Jim Ochowicz said that the team was very happy to have secured Kochetkov's signature and to have him on the squad for the next two years.

"Pavel will be an asset for the team in a team support role, especially in terms of racing with Ilnur Zakarin, as the two have raced together for the last five years," Ochowicz said. "Given that Russia is a key market for our title sponsor CCC, we are also excited to be developing more of a presence in Russia and increasing exposure for CCC Team and CCC.

"Pavel will also have the opportunity to have more freedom at races and, with his experience at the Grand Tours, he will be an important rider in our Grand Tour teams. I think we will provide a good environment for Pavel to reach his potential as a rider, especially as we continue to grow as a team," he said.