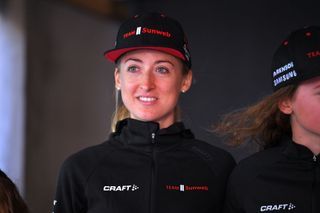 Leah Kirchmann (Team Sunweb) has fully recovered from the injury that prematurely ended her 2019 season as she embarks on a crucial year that kicks off at the Women's Tour Down Under and includes both the World Championships and the Tokyo Olympic Games.

The Canadian rider was sidelined back in September after a crash during the Boels Ladies Tour left her with a torn MCL. The injury ruled her out of the World Championships in Yorkshire but the extended time off the bike gave her the chance to take a much-needed winter break. Speaking at Sunweb's team presentation earlier in December the 29-year-old explained the positive aspects of her time off.

"The recovery has gone really well. I took some time off after it happened and now I'm back training normally and feeling strong ahead of the new season," Kirchmann told Cyclingnews.

"I took six weeks recovery and then I could start up after that. That gave me a really good break and I just embraced that as the start of my off-season. I saw friends and family, and just recharge heading into a new year."

The 2019 season had been a successful campaign for Kirchmann up until her crash in Holland. She had been a consistent presence in the spring Classics and picked up several top-ten performances before a consistent Tour of California netted two top-ten rides. After a successful spell in Canada, she returned to Europe with sixth overall in the Women's Tour, before taking second at La Course in July. Third on GC in the Ladies Tour of Norway followed in August and it looked like Kirchmann was hitting form just at the right time with the Worlds on the horizon.

"Honestly, before the injury, I was really happy with my season. I was able to hold a really consistent level all year, and achieve some big goals, like the podium at La Course. It was just unfortunate that I had to miss Worlds as I had a good build-up. Other than missing the last part of the season I was happy with the year.

"I'm trying to see the injury as an advantage because it gave me a longer break. I feel motivated and refreshed. It's a big year with Worlds, of course the Olympics, and the expansion of the sport. I know that I'll be starting in Australia but I've never been before. I'm looking forward to seeing a new country and it's also been really cold in Canada, so I'm excited about training somewhere warm. I'm going a bit earlier, so that I can train with the Canadian track team in New Zealand, so I'm going early to get used to the time difference and the conditions."

Kirchmann's full race programme has not yet been confirmed but along with a start in Australia she will play a prominent role in Sunweb's WorldTour schedule as the team looks to cement their place in the top tier of women's cycling. The Olympics certainly take a certain degree of focus too, with Kirchmann vying for one of two spots on the national team.

"I'm just looking to continue my improvement as a rider. I want to achieve a super consistent level and help the team by going for some victories myself. With the Olympics I hope to be there as well, representing Canada. We have two spots so it's going to be competitive to make the team."

A lack of Olympic equality

While the Olympics hold a huge degree of importance for riders like Kirchmann the lack of equality when it came to the number of spots between men's and women's fields once more brought home serious questions about the state of professional sport. Tokyo will, for example, see 130 elite men ride the road race but only 67 women will be afforded the same opportunity in their event.

When the news over race quotas were first announced in November the governing bodies involved received criticism and Kirchmann agrees that more could and should be done in order to reach parity.

"I think it's about time that they change that. There should be equal spots for men and women. It's not acceptable that there's a vast difference. I've heard that it's now an issue that has been raised with the IOC and that the UCI are working on it," she told Cyclingnews.

"My dream is that the next Olympic cycle sees an equal number of spots. They promote themselves on equality so that how's it should be reflected. Women's cycling has grown so much in the last few years, and we have more and more riders joining the team. There are more teams and more races."

Team Sunweb have done more than most other teams to establish a level of gender parity. They have a women's WorldTour team that sits alongside their male counterparts, while there is also a development team within the programme.

"Sunweb is a great blueprint for others to follow. Sunweb were one of the first to start running a programme like this, where it's integrated with multiple teams. We have access to all the same resources and it's all done as one team.

"It's encouraging that in the last few years that other teams have started adding women's teams and development teams. We've shown that this is a successful model and that it actually brings the team more exposure from having an expanded programme."