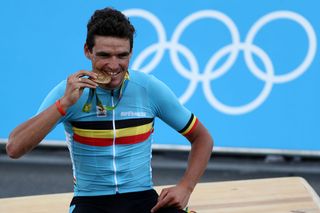 The elite men's road race will be held on July 25 starting from Musashinonomori Park and ending at the Fuji International Speedway. The peloton will include 130 athletes with national teams from Belgium, Colombia, France, Italy and Netherlands holding the highest number of competitors at five riders per nation on the start line.

The 234km route will favour the climbers, with the parcours tackling four climbs: Donushi Road and Kagosaka Pass, and including the outer slopes of Mt Fuji, with a total of 4,865 metres of climbing.

Belgium's Greg van Avermaet is the defending champion after winning the gold medal at the 2016 Rio Olympic Games. The route will likely better suit riders such as Egan Bernal (Colombia), Thibaut Pinot (France), and Vincenzo Nibali (Italy), although national teams have not yet been selected.

Nations that secured four athletes per team include Australia, Denmark, Great Britain, Germany, Norway, Slovenia and Switzerland. Nations with three riders per team include Austria, Canada, Czech Republic, Kazakhstan, Poland, South Africa and Russia. All other competing nations earned either one or two spots per team.

The elite women's 137km road race will be held on July 26, also starting from Musashinonomori Park and ending at the Fuji International Speedway. The women's course will not go over Mt. Fuji but will include climbs over Donushi Road and Kagosaka Pass, and total 2,692 metres of climbing.

The women's race will field 67 athletes, whereby nations Australia, Germany, Italy, Netherlands and the United States with have most riders per team. Each of these nations secured a total of four athletes.

Belgium was the only nation that secured three spots for the women's road race, while nations that secured two riders per team included Canada, Denmark, Spain, Great Britain, Japan, Norway, Poland and South Africa. All other competing nations secured one spot.

The are a maximum of two spots available for the elite men's 44.2km and elite women's 22.1km individual time trials that are both held on July 29.

Nations that reached the maximum quota for the men's event include Australia, Belgium, Spain, Great Britain, Germany, Italy, New Zealand, Poland, Switzerland and the United States. All other competing nations earned one spot.

For the women's time trial Australia, Canada, Germany, Netherlands and United States will start two riders, while all other competing nations will start just one rider.

Retired athletes Kristin Armstrong (USA) and Fabian Cancellara (Switzerland) won the gold medals in Rio. Favourites to win the time trials in Tokyo include Annemiek van Vleuten (Netherlands) and world champion Chloe Dygert (USA) for the women's race,  while world champion Rohan Dennis (Australia) and Tom Dumoulin (Netherlands) will be the favourites for the men's race. National teams have not yet been selected, however.

According to the Olympic qualification system calendar for road cycling, the National Olympic Committees must confirm the number of quota used by December 15, 2019, before the UCI reallocates the remaining places.