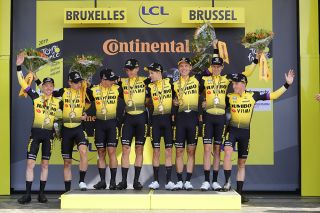 The chairman of the Dutch Anti-Doping authority has said he feels 'uncomfortable' with the Jumbo-Visma team's use of ketones.

Herman Ram, who has headed the Netherlands' anti-doping body since 2006, told the newspaper De Limburger that the controversial supplement drink exists in a 'grey area' and that official advice from his organisation is not to use it.

Ketones are produced by the liver once there are no carbohydrates to burn, and fat stores begin to burn, and so synthetic ketones are thought to provide an added energy source that helps preserve glycogen storage, reduce lactic acid, and aid recovery.

They are classified as a dietary supplement, rather than a drug, and they're not on the World Anti-Doping Agency's list of prohibited substances. However, the supposed performance benefits, coupled with the lack of research on long-term effects on health, have made them a controversial substance. Nevertheless, the Jumbo-Visma team were open in revealing they use ketones at last year's Tour de France.

"It is a legal nutrition but, at the same time, too little is known about the possible health consequences," Ram said.

"That makes it a grey area. It is not on the doping list, but if we receive questions from athletes, we advise them not to use ketones. Team Sunweb does not use them for that reason, either. I find it uncomfortable that Jumbo-Visma does."

According to Kieran Clarke, a British scientist who helped develop the ketone supplement, at least six teams were using ketones during the 2018 Tour de France but none of the teams wanted to be named. Last summer, Jumbo-Visma confirmed they used ketones, along with Lotto Soudal. They have been linked to Deceuninck-QuickStep's success, too, along with Team Ineos, although the latter have flatly denied that's the case.

"Precisely because ketones are natural, we do not expect that there will be any adverse health effects in the long term. I understand that Ram says this from his position, but if you understand well how ketones work, those worries are unnecessary," Keukendrup told De Limburger.

"Because so little research is available, we test them ourselves. So we do our own research. Because we mainly use them in competitions, all kinds of variables also play a role. That is why I think it will be years before we know enough about how it works."

As for the supposed performance-enhancing properties: "It is certainly not the panacea that many see it as."