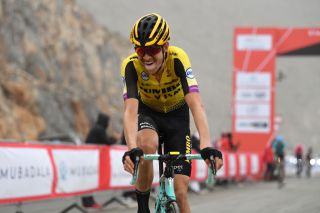 Laurens De Plus has revealed he uses ketones, likening the taste of the legal but controversial supplement drink to gin and tonic.

This summer, it emerged that the use of ketones was widespread at De Plus' team, Jumbo-Visma. However, rival teams have expressed concerns, both regarding the enhancement of performance and the possible health impact on the liver.

Speaking on De Tribune on Belgium's Radio 1, De Plus was open about his and his team's use of ketones.

De Plus: Crashes changed me as a person

"If you indicate that you want to use it, the team arranges everything and they include it in your supplement plan," De Plus said.

"It tastes a bit like Gin-Tonic with a lot of imagination, but actually nobody in the team likes it. Not everyone in the team team uses it, but I feel good about it.

"I am satisfied with it and I am happy that it is not done hysterically. Everyone can buy it. It is only the way it is used that can make the difference."

Ketones are produced by the liver once there are no carbohydrates to burn, and fat stores begin to burn. Synthetic ketones, used in conjunction with a low-carb diet, are thought to provide an added energy source that helps preserve glycogen storage, reduce lactic acid, and aid in recovery. It is classified as a dietary supplement, rather than a drug, and is not on the World Anti-Doping Agency's list of prohibited substances.

According to Kieran Clarke, a British scientist who helped develop the ketone supplement, at least six teams were using ketones during the 2018 Tour de France but none of the teams wanted to be named. This summer, Jumbo-Visma confirmed they used Ketones, along with Lotto Soudal, while they have been linked to Deceuninck-QuickStep's success, too.

It has been suggested Chris Froome and Team Ineos have used ketones but both parties have flatly denied that's the case.

"Ketones are a dietary supplement. You can use them just like vitamins. The substance is not on the prohibited list, and it's also known that other teams use ketones," said Jumbo-Visma manager Richard Plugge this summer.

However, many rival team managers have expressed concerns and refuse to use them. Some point to the exorbitant cost of the supplement, while others worry about the possible health consequences.

"They naturally occur when the liver turns lipids (fats) into glucid (sugar)," Jean Jacques Menuet, the Arkéa-Samsic team doctor, told the AFP news agency. "I don't want to receive a letter in 10 years from a rider telling me that his liver is ruined."