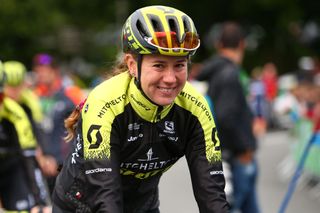 Mitchelton-Scott announced Friday that they have re-signed Jessica Allen to the roster for 2020. The Australian has played a prominent role in the team's success during the Classics and will once again aim to support riders like Annemiek van Vleuten at the one-day and stage races.

"I love the culture and atmosphere of this team and the riders we have now are the best in the world and it is great to ride for them and I am getting stronger from riding for them," said Allen, who joined Orica-AIS in 2016 and has stayed with the team through the previous four seasons.

"Every year I feel like I am improving and getting better and next year I want to be able to help further into the hard races. I love targeting the Classics, I like the technical aspects of them so that will be an area to focus on next year and then I’ll target each block of racing with some good recovery between each."

Martin Vestby, director, said that Allen is one of the top domestiques on the team and oftentimes plays an on-road captain during the races.

"Jess has been taking steps every year and getting stronger. She is like a glue in the team, she takes her domestique role very seriously and is very proud of doing that job. She is a valuable rider, navigating the team in races, positioning them well and working hard in the early phases of the race," he said.

“We have seen improvements in that she is lasting longer in races and can handle more and more, so from that aspect she is an important rider in balancing the team.

"She is also a big team player outside of the races, off the bike, which I think is very important to have so we are pleased she is continuing with us in 2020.”

Mitchelton-Scott is one of the eight teams that has applied to be among the highest level of the UCI's new two-tier team system in 2020.

“I think next year will also be a huge step forward for the team with having three new really strong riders," Allen said. "In the past we’ve had less riders so I think that will help all of us a lot, being able to spread things out and allow us to target races better.”