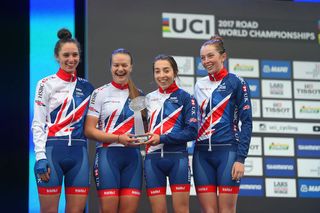 Britain's Jess Roberts has signed to race for the Mitchelton-Scott women's team for 2020, where she will join forces with the likes of Annemiek van Vleuten and Amanda Spratt, the team has announced.

Roberts has ridden the 2019 season for British Cycling's academy squad Team Breeze, but will now step up to the sport's top level with one of the most accomplished teams in the sport.

"I'm really excited to join Mitchelton-Scott, and look forward to learning from some of the best riders in the world," said Roberts on the team's website. "It's my first pro contract, so it's a big step up, but I feel this is the right team for me to grow and develop for the future.

"It's really special for me to be stepping up to the WorldTour. It feels quite surreal saying I'm part of it, and I'm really excited to see what the future brings."

Roberts won the elite women's British road race championships in 2018 at the age of just 19. She comes from a track background, however, and won this year's under-23 omnium at the European track championships in Ghent, Belgium.

On the road this season, Roberts won the final two stages at the Tour de Bretagne Feminin in France, and is looking forward to progressing on the road with her new team.

"I've heard lots of good things about Mitchelton-Scott," she continued. "It seems like it's a nice, chilled atmosphere where you can have fun as well as be serious and race hard on the bikes.

"I think, for me, it's the right time to move on to a bigger team to keep pushing myself, which is important for my development. In the future I'd like to put more focus just on the road, so I feel making this step now will help me achieve my road goals," said Roberts.

"The whole experience is new to me but I will always put 100 per cent into helping my teammates, and I'm always willing to learn new things. It's really exciting for me to be on the same team as riders like Annemiek van Vleuten, as this will enhance my development even more."

Mitchelton-Scott sports director Martin Vestby revealed that the team was looking for a pure sprinter to join the squad.

"We had the choice of going for somebody already established or to find a new talent that we can let grow in the team and build up in the coming years, and we opted for the latter," Vestby said.

"Jess is a really interesting rider and has shown great potential in the road races she has done this season, and of course last year winning the British Championships when she was just 19 years old," he said.

"She comes from the track and is hoping to go to Tokyo [Olympic Games] so next year her programme will depend a little bit on that, but we are really excited to be a part of her development and journey."