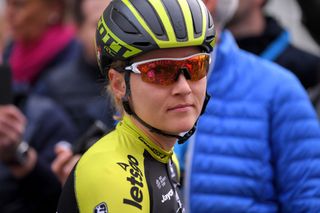 Mitchelton-Scott announced on Tuesday that they have renewed Gracie Elvin's contract for a year, taking her through to the end of 2020. The extension will mark the eighth consecutive season that Elvin has spent with the Australian programme.

Elvin: Giving riders a voice shows them they have choices

Elvin started her career as a professional in 2012 with the Faren-Honda team, but moved to Orica-AIS in 2013. She has stayed with the programme through its sponsorship changes to Mitchelton-Scott.

She has gone on to be one of the most experienced support riders on the team and in the peloton. She is a former two-time national champion and played a key role in Annemiek van Vleuten's Giro Rosa triumph in 2017.

"It's still such a great environment to be in as a person and as a rider, so I'm happy to stay with the team and continue with some of the girls I've been racing with for a long time, and to see some new faces as well," Elvin said.

"I'm always trying to look for ways to challenge myself, so I'm going to pick a few challenges for next year. I'm not sure quite what they are yet, but I've always got a love for the Classics. I think that part of me won't change, so I'm looking forward to going back to Belgium again."

Mitchelton-Scott is one of the eight teams that has applied to be among the highest level of the UCI's new two-tier team system in 2020. The team has already announced new signings Jessica Roberts, Sofie De Vuyst (from Parkhotel Valkenburg) and Janneke Ensing (from WNT-Rotor). Returning riders include world champion Annemiek van Vleuten, Grace Brown, Lucy Kennedy and Moniek Tenniglo.

"I think it's really important for our team to have that European flavour. That's been part of our success from the beginning. I think it's great that we keep adding new blood, different perspectives, different ages, different experience levels; it keeps everyone on their toes a bit," Elvin said.

"You don't need to be the same to be successful. It's important to evolve and keep changing, personally and as a team."