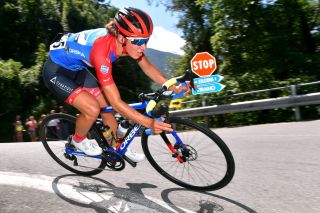 Ensing, a 10-year veteran of the professional peloton, spent part of 2019 with Team Sunweb before moving to WNT-Rotor in May. She was recently fourth at the Emakumeen Nafarroako Klasikoa in july and second at the Classica San Sebastian in August.

Among her career palmares, Ensing includes victory at the 2018 Le Samyn des Dames, a stage win at the 2017 Boels Rental Ladies Tour and second overall at the 2017 Tour Down Under. Ensing has also finished second at Gent Wevelgem twice, in 2014 and 2015.

"I’m really happy that I can join one of the best teams in the world," Ensing said in a statement provided by the team. "I like how Mitchelton-Scott is racing. You can see that the team makes a plan and then everybody really works hard for that, and I like that many riders also get their own chances.

“When I have raced against the team in the past seasons, I've noticed the team spirit and I think I can contribute to that, too. I am a real go-getter and have a positive attitude and I would like to use these qualities with this team."

"Janneke is a strong rider, we’ve seen her potential, she’s performed really strongly in some races and I think we are giving her the right environment where she can step up and be on that top level for more or less the whole season," Vestby said.

“She is an aggressive rider that is good to have in the breakaways. She can do a bit of everything, and this really fits well in the group that we have for next season.

“Janneke can get over a lot of hilly courses and will be a really good supporter for our main climbers in the team, a bit like our other signing Sofie De Vuyst," Vestby said.

“With myself and the two other new riders that the team has contracted, plus the riders that are already in the team, I am sure we can take another step forward, and I hope I can provide extra support during difficult races,” Ensing said.