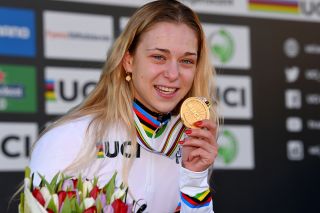 The start list for the elite women's road race at the Dutch National Championships took a hit as Inge van der Heijden tested positive for coronavirus ahead of the race.

According to NOS, the former U23 cyclo-cross world champion, who recently moved from CCC-Liv to the 777 team, does not have symptoms.

Transfer mechanics: The inner workings of the women's market – Part 1

The positive test in turn took two more riders out of Saturday's race, as teammates Yara Kastelijn and Aniek van Alphen had ridden with van der Heijden on a reconnaissance of the course earlier in the week. In addition, sport director Camiel van den Bergh, who led the recon, will not be in the team car during the race.

The race also lost a fourth rider as Mascha Mulder (Group Hens-Maes Containers) announced she would not start due to contact with someone who was positive. The 26-year-old twice tested negative in line with pre-race health regulations but decided not to start as a precaution.

"After two negative tests, everything was okay to start. But yesterday evening I received a phone call that after Wednesday's test I had come into contact with someone who tested positive," she said.

"After consultation with the team and our own guidance, we decided not to start as a precaution and to follow the guidelines."

The Dutch women's road race takes place on Saturday afternoon, on a 124.1-kilometre course made up of 17 laps of a 7.3km circuit, featuring the short VAM-berg climb.

There is a strong field, with current world champion Annemiek van Vleuten (Mitchelton-Scott), the previous world champion Anna van der Breggen (Boels Dolmans), and former world champion Marianne Vos (CCC-Live) among the favourites. 2019 Dutch champion Lorena Wiebes is there to defend her title in her first appearance for Team Sunweb.