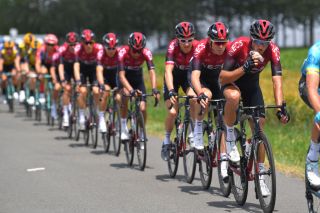 Team Ineos in action at the Tour de France in 2019. They finished first and second in the race. (Image credit: Getty Images)

Jim Ratcliffe has stated that Ineos would have no hesitation in pulling the plug on their WorldTour team if cheating was found within their ranks.

The comments come as former staff members of British Cycling and Team Sky – the previous name of Team Ineos – face questions relating to the General Medical Council's (GMC) case against doctor Richard Freeman. Despite initially denying the claims, Freeman has admitted that he ordered sachets of the testosterone drug Testogel to the British Cycling and Team Sky headquarters in Manchester in 2011. It’s alleged that the drug was ordered to treat an athlete, a claim that Freeman denies.

Freeman resigned from his post in 2017, and is now facing the Medical Practitioners Tribunal Service after the GMC raised 22 allegations of misbehaviour, only four of which Freeman is contesting. All relate to the Testogel order and his motivations for making it.

Speaking to the Times, Ratcliffe reiterated his words from earlier in the year, stating that Ineos ran a clean operation and that they carried out thorough due diligence before taking over the sponsorship from Sky in the spring of this year.

According to Ratcliffe, his confidence in his team's current practices stem from the high levels of due diligence his legal team undertook before agreeing to sponsor Brailsford's team to the tune of around £40 million. The squad has won the Tour de France every year bar one since 2012, with their only blip coming in 2014 when Chris Froome crashed out.

In 2019 Egan Bernal won the race in just his second attempt, while 2018 winner Geraint Thomas finished second. It was the second consecutive year in which the squad finished with two riders on the podium.

“We checked all the procedures, everything, doctors’ records," Ratcliffe said. "You buy a cycling team, there wasn’t much legal work to do but we spent a lot of time on due diligence on the team. We had external lawyers do those checks, looking at the procedures, testing. We took it seriously. The regulations when we bought, and the procedures in Team Sky, were the most sophisticated and rigorous in the cycling world.

“Our chief counsel, who looks at compliance across Ineos, was responsible for looking at compliance in cycling. And if he ever tells me he has a concern, that will be it for us. The day any of that enters our world then we would leave cycling. I don’t think it will.”

Ratcliffe, Brailsford and Chris Froome presented the Team Ineos colours on the eve of the Tour de Yorkshire in May. Brailsford and Froome were asked about the team’s willingness to drop their Ocean Rescue livery from the 2018 season and work with one of the largest producers of plastics less than a year later. At the same time, Ratcliffe was asked about the credibility of the team he had just agreed to back.

A portion of Team Sky’s success came at a time when UKAD launched a 14-month investigation into a suspect package delivered to the team at the 2011 Critérium du Dauphiné. There was an accusation that the package contained the corticosteroid triamcinolone - banned in-competition without a Therapeutic Use Exemption - a claim that the team denied.

The UKAD investigation was closed without any anti-doping charges issued, but a UK Parliamentary Select Committee later declared that "the credibility of Team Sky and British Cycling is in tatters - they are in a terrible position."

In 2017, an anti-doping case was brought against Chris Froome after his Vuelta a España win, though he was later cleared of any wrongdoing by the UCI and WADA.

"The day that any of that enters our world, we’ll be exiting that world,” Ratcliffe said back in May.

"I have no interest in using methods to enhance performance that you shouldn’t use. I have no problem with marginal gains - better chainrings or better aerodynamics, that’s fine, that’s all Formula 1 stuff - but I’ve got absolutely no interest in cheating. That’s not my game.”

The GMC case against Freeman continues.

Questions about a greenwashing

Pooley: Brailsford and Sky need to get their facts straight

Cope: I don't know what was in the package for Team Sky

No doping charges for Wiggins, Team Sky and British Cycling over mystery package