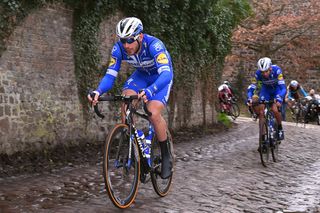 Florian Sénéchal on the attack during the 2019 race (Image credit: Getty Images/Luc Claessen)
JUMP TO:

The 2020 Classics season got under way at the weekend with Omloop Het Nieuwsblad and Kuurne-Brussel-Kuurne. On Tuesday, the semi-classic Le Samyn continues the action before the one-day races move to Italy for coming weeks.

Once again, Cyclingnews will be bringing you reports, interviews, results and news throughout the Classics, starting with Saturday's race. Read on to find out how to watch Le Samyn via live stream, no matter your location, with ExpressVPN.

Despite being among the second-tier of cobbled Classics, Le Samyn attracts some big names every year, with Magnus Bäckstedt, Robbie McEwen and Philippe Gilbert among the race's past winners.

The 202km route, which runs between the Walloon towns of Quaregnon and Dour, concludes with three laps of a 27km finishing circuit and takes in 20 cobbled sectors plus eight classified climbs as well as an uphill finish. The weather is set to be cloudy with rain showers, to make it even more interesting.

The Spring Classics are being aired live across Europe via Eurosport and on the Eurosport Player, with British Eurosport showing almost every race live.

In North America, both Fubo.tv and FloBikes are airing a number of Classics throughout the spring, though neither offering is as comprehensive as Eurosport's.

Subscribing to FloBikes cost $150 for the year and gives you access to watch most of the season's biggest races. Fubo.tv, meanwhile is available for a week's free trial, while their most popular package costs $54.99 per month for over 75 channels.

A handful of major races will also be available to view via NBC Sports Gold, which is available for a cut-price fee of $19.99.

In Australia, SBS will show Flanders, Roubaix and the Ardennes triple.

As you might expect, local broadcasters such as Sporza, RTBF and Rai Sport are showing the bulk of the spring Classics live. Feeds will be geo-restricted, mind.