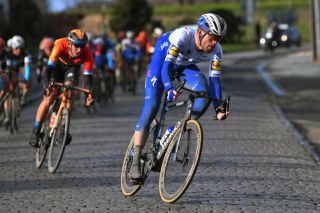 Florian Sénéchal lines up as the leader of his seven-man Deceuninck-QuickStep squad in the Walloon town of Quaregnon on Tuesday, ready to try to defend his Le Samyn title with the support of the likes of Iljo Keisse, Alvaro Hodeg, Tim Declercq and Davide Ballerini.

Last season, with three Deceuninck-QuickStep riders – Sénéchal, Declercq and Pieter Serry – in the decisive 10-man break, it was the Belgian team's race to lose, and, after Declercq almost succeeded with a lone attack and was only brought back inside the last kilometre, it was left to Sénéchal to mop up the victory in what was the Frenchman's first, and still only, professional victory.

Deceuninck-QuickStep also won the race in 2018 thanks to Niki Terpstra, who subsequently left the Belgian WorldTour team at the end of the season to join Total Direct Energie, and the Dutchman will again be one of the favourites, looking to take a third title at the finish in Dour, having also won in 2016.

Asgreen continues to soar up Deceuninck-QuickStep hierarchy with Kuurne victory

"Le Samyn is a very hard race – we know that from the past years – so we're going there with a strong team," said Deceuninck-QuickStep sports director Rik Van Slycke on the team's website. "The parcours hasn't changed [from last year], and if it's windy, then we'll have to pay attention and make sure we are in the right echelon.

"Florian took a beautiful win here last season and is in good shape, Alvaro is fast, and we'll look to him if it comes down to a bunch sprint, and they are just two of the options we have for Tuesday," said Van Slycke.

"We are motivated after the team's excellent display last weekend in Belgium and France," he continued, referring to Kasper Asgreen's victory at Kuurne-Brussel-Kuurne on Sunday and Rémi Cavagna's win at the Ardèche Classic on Saturday, "and we'll try to again to get a good result."