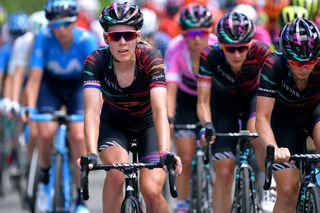 Hannah Barnes (Canyon-SRAM) finished second in 2018 Tour of Guangxi and she will return to this year's edition with a goal of placing one step higher on the podium in Guilin. The one-day race held on October 22 will close out the Women's WorldTour and offer riders the last opportunity to secure a series victory.

"I had a good race last year and would love to finish the year with a result I can be proud of," Barnes said in a team press release.

"It's quite a long race with a bit of everything. The first 90km is flat and easy and then we hit the climbs which last year saw some action although it all came back together for a bunch sprint."

The women will race 146km with a start and finish in Guilin, and on the same circuit as last year. The route is mainly flat, but there are two back-to-back climbs, with the second ascent peaking at the 104km mark, followed by a descent and flat 30km to the finish line.

"As it is the same race course as last year, I expect quite a similar race," Riffel said. "Being the last WorldTour race of the season the level will still be high even if the most riders are already enjoying their off season. Two climbs one just after another in the middle of the race will probably decide the constitution of the group going for the win."

The Tour of Guangxi marks the end of the 2019 Women's WorldTour. The series is currently led by Annemiek van Vleuten (Mitchelton-Scott) but only by five points ahead of Marianne Vos (CCC-Liv) and 170 to third-placed Lorena Wiebes (Parkhotel-Valkenburg). Van Vleuten is not registered to race in China, leaving the series title open.