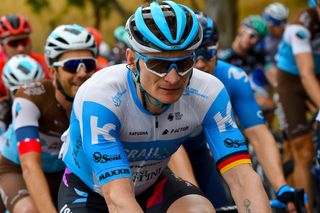 Israel Start-Up Nation sprinter André Greipel says that he's fully recovered from the fractured shoulder he sustained in a training crash in early February, and has been building up his training intensity in readiness for a return to racing. Meanwhile, Australian teammate Rory Sutherland broke his femur in an electric scooter accident in December at the team's get-together in Tel Aviv, Israel, and believes he'll now be ready for competition in another month.

Thirty-seven-year-old Greipel crashed while training near his hometown of Cologne, Germany, in early February, following his return to Europe from the Tour Down Under and the Cadel Evans Great Ocean Road Race in Australia.

The 11-time Tour de France stage winner was able to train again on the road by early April, and recently announced that he had re-signed with the Israel Start-Up Nation squad for another two seasons.

"The last four months, I've felt that I still have the motivation, and I've been working full time to recover from my injury," Greipel said in a team Facebook Live interview.

"Ten days after my accident, I was on the rollers with one arm, and during the COVID-19 lockdown, I could train a lot and get base kilometres in. Since April, I’ve done specific training. Now, with competition in sight, it's easier to work towards certain goals," he explained.

Greipel's teammate Sutherland broke his leg after crashing on an electric scooter while on his way back to his hotel after having had dinner in Tel Aviv during the team's December training camp. He said in March that he was feeling driven to try to return to his best, and said on his team's website on Wednesday that he was now close to achieving that goal.

"There have been moments that I was unsure whether I could ever return to my former level," admitted Sutherland. "Recovering from this injury is the hardest thing I have had to do in my sporting career.

"It's only in the last two to three weeks that I've noticed that the patience and hard work has paid off," the 38-year-old said. "I honestly had my doubts whether I ever could get to WorldTour-fitness again, but now I know that I can do it."

Sutherland said that the halt in all competition due to the coronavirus pandemic had counted in his favour while he worked to come back from his injury.

"I'm very fortunate as I have had the time and the patience to be able to do it properly. Having no racing has allowed me to do things correctly and build, together with my trainer Paulo Saldanha from PowerWatts, in a slow but constant manner.

"I could race now, but another month of training will allow me to rise to a competitive level," he said. "I feel like I'm on 95 per cent of my capacity now, and that is honestly amazing to me. It's great to feel like I am nearly there, ready to race again."

Sutherland also thanked his team for all their support since his accident, and said that he's looking forward to his first race in the colours of the team he joined from UAE Team Emirates for this season.

"I'm personally excited to get to my first race with Israel Start-Up Nation and repay the team and [team owner] Sylvan Adams for all the help and support they have given me during the last six months," he said.

"I have experienced incredible support from the entire team, and now I'm ready to get out there and race. I also honestly think all of this, the whole rehabilitation process, will bring me more of an appreciation of racing and riding my bike."

The team also gave injury updates on another new signing, Belgian Ben Hermans, who broke his collarbone and fractured his shoulder at the Tour Down Under in January, and Colombian climber Edwin Avila, who crashed out of the Tour du Rwanda in February.

"The recovery took a while, but I have had my last therapy and I am training seriously again," said Hermans. "I nearly have 100 per cent of the range of motion with my shoulder, and I don't foresee many problems during races. The only thing that might be difficult is putting on a rain jacket on top of a climb.

"I am definitely on my way back," the 34-year-old added. "I'm following my training programme, my weight is good, and I'm preparing for the Vuelta a Burgos as my first race of the new season. I feel fresh, energetic and already quite in shape."

Speaking from Colombia, 30-year-old Avila said: "I do need to work a bit more to fully get back in shape, but I am progressing. Now that it seems that cycling races are returning worldwide, I'm looking forward to competing again."

Israeli youngster Edo Goldstein of the Israel Cycling Academy Continental feeder team – and younger brother of Israel Start-Up Nation rider Omer Goldstein – is also on his way back from breaking his hand in training earlier this month.

"I can't ride outside yet, so I'm back on the rollers," said 20-year-old Goldstein, who said that he hoped to be able to race again at the Tour de Savoie in France in early August.