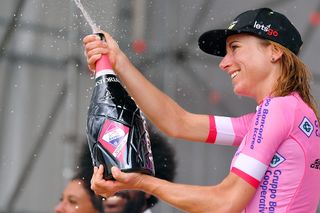 Organizers the 2020 Giro d'Italia Internazionale Femminile unveiled the lineup of Women's WorldTour teams for the nine-day race, rescheduled for September 11-19. 24 teams representing 14 nations will compete for the pink jersey in the 31st edition of the race.

The revised late-season calendar for the Women's WorldTour, announced in May, includes just 12 events from August to November. The Giro Rosa is one of only two stage races on the calendar and will attract a field full of top talent, with defending champion Annemiek van Vleuten (Mitchelton-Scott) looking for a third win in a row.

"The Giro Rosa grows every year and this September edition will be a confirmation. Soon we will be able to say more about the individual participants, but considering the level of the teams, at the start I feel like saying that it will be a decidedly sparkling edition. We owed it to the girls and the public who made us feel their affection in these difficult months. It will be a good restart, I promise you," said Giuseppe Rivolta, director of Giro Rosa.

There will be eight UCI Women’s World Tour squads and 16 UCI Women’s Continental teams starting the race with a team time trial in Grosseto, Tuscany. There are four mountaintop finishes this year, including the final day in Motta Montecorvino.

Boels-Dolmans signs Cecchini and Fournier for 2021

Italian Elena Cecchini and Roxane Fournier of France have signed to race with the SD Worx Cycling Team in 2021.

In February it was announced that SD Worx would become the new main sponsor of the Boels-Dolmans Cycling Team. For 2021 the women's team will continue under the name SD Worx Cycling Team.

Cecchini, a 28-year-old who signed a two-year contract, looks to strengthen the team in the spring classics. She currently rides for Canyon–SRAM.

“In these uncertain times and without races you don’t expect to get offered a new contract with a new team. I have taken some time to consider the offer. After five years with the same team isn’t easy to leave the familiar surroundings of my present team. On the other hand, I am sure that this is the right step for me. The Boels-Dolmans team has been for years the best team in women’s cycling," said Cecchini in a team statement.

Fournier, also 28, signed for one year as a rider to lead out sprints and target stage wins. She currently races for a Continental squad, Chevalmeire Cycling Team.

“This is the first time I will ride for such a strong team. I hope I can make some tactical steps in my career with this transfer. This team always rides very aggressively. I think I can be of value in an escape. With my sprint I have a weapon, this gives the team also a tactical advantage," said Fournier.

Anna Plichta of Trek-Segafredo captured her second consecutive individual time trial title in the Polish National Championships on Thursday. She won by a 49-second margin over Marta Jaskulska (CCC-Liv).

“I was a bit stressed before this race because it felt like the first one of the year. It was a big goal for me so I was motivated for today and I was already training a long time with this in my head that I want to win the nationals again and defend the jersey," said Plichta, who took the crown in Busko Zdrój on the 22km course.

“The race was hard. The course was flat, not technical, and quite open and windy. It was all about power, all about pushing. I knew that I needed to pay attention to my power and not push too hard in the first direction which was more a tailwind so I knew that the way back would decide the race. So I think I made a good tactical plan.

“I have to say that having the support from the team during the lockdown period helped a lot. It was hard for everyone mentally in the last months to be focused and motivated to train hard. But I know I did everything 100 per cent and there’s nothing I could have done better. Everything I could I gave today, and I am really happy about this,” added Plichta.

She will race the Polish Road Race National Championship on Sunday.

Kastelijn won the Superprestige in Gavere and the Koppenbergcross last season. She will lead Manon Bakker and Aniek van Alphen in her new formation.

"I am very happy with this opportunity," Kastelijn said according to Sporza. "Last season I still had a lot to learn, but after my European title and some nice victories, I am now ready to become the leader.

"I had a wonderful time with Team 777. Still, I had the feeling that I was somewhat limited by the team tactics. That is, of course, logical with strong teammates such as Annemarie Worst and Alice Maria Arzuffi. I now want to take up the gauntlet against the rest of the field and take my own chances."