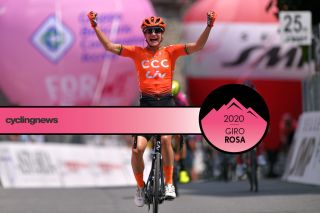 "We would like to compete in this race for stage wins," said CCC-Liv sports director Jeroen Blijlevens, "So we'll try to be in the breakaways. We know what Marianne Vos is capable of: she won four stages last year."

Niewiadoma: I'm aiming for the greatest Giro Rosa of my career

The organisers revealed the full route details last month, and it will include visits to the regions of Tuscany, Umbria, Lazio, Campania and Puglia in what is regarded as a tough route, but perhaps not as challenging as in previous years, when it has included major mountain passes.

The race will begin with a team time trial and a Strade Bianche-style stage 2, and then include four hilltop finishes, with the first two on stage 3 in Assisi and on the 170.3km fourth stage to Tivoli, and then on stage 8 at San Marco La Catola and on the finale stage 9 at Motta Montecorvino.

CCC-Liv will line up with a GC contender in Ashleigh Moolman-Pasio, although the South African's just returning to competition after recovering from a crash while training ahead of Strade Bianche.

Moolman-Pasio is nevertheless a strong contender for the overall classification after finishing fourth last year, second in 2018, and fourth in 2015.

"It's the first race for Ashleigh Moolman-Pasio since her crash in the run-up to the Strade Bianche," Blijlevens said.

"She feels good and wants to prove herself. The training data confirms that she's in good shape. We hope it shows in competition, and that Ashleigh will be able to go for a good classification. The second stage to Arcidosso is already a very challenging one, and that stage will make it somewhat clear what the level is like in the peloton."

CCC-Liv will field a team that also includes Sofia Bertizzolo, Soraya Paladin, Sabrina Stultiens and Pauliena Rooijakkers, and Blijlevens said that he believes they all have opportunities for success.

"I also have high hopes for the others," he said. "Soraya Paladin, for instance, finished in the top 10 in seven stages last year. Who knows? She might take a win this year. The advantage of CCC-Liv is that the team has strength in depth, with Pauliena, Sabrina and Sofia, who are also all in good shape."