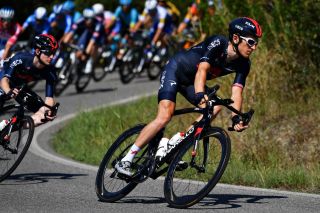 Ineos Grenadiers' Geraint Thomas is back racing at Tirreno-Adriatico this week, where he told reporters that his omission from his team's Tour de France squad was due to the fact that he "didn't feel 100 per cent", while the 2018 Tour champion also admitted that he wouldn't have wanted to have gone there just to have ridden for the team.

Instead, Thomas will be the British team's leader for the rescheduled Giro d'Italia (October 3-25), where he hopes that the three individual time trials – compared to only one at this year's Tour – could play to his strengths.

"It was a disappointment not to be 100 per cent for the Tour, but I've definitely done some good work now. I think the extra six weeks [until the start of the Giro] will help me," Thomas told Cyclingnews and La Gazzetta dello Sport at Tirreno-Adriatico.

"I'm fully motivated for the Giro because I've spent a lot of time in Italy. The three time trials suit me, too, and so I'm really looking forward to it," he said.

"Obviously, the Giro was a big goal in 2017, but I crashed out. I always said I wanted to come back again, and so this year is perfect for that," continued Thomas. "It was always in the back of my mind to come back and try to get a GC result."

Chris Froome: I wasn't where I needed to be for Tour de France

Expanding on his non-selection for the Tour – teammate and four-time winner Chris Froome also wasn't picked, and will target the Vuelta a España later this season – Thomas was clear that the competitive fire for future Tours de France is still there.

"I think there were a number of things – not just one thing you can put your finger on and say it was because of this," he said of team principal Dave Brailsford's decision to leave Thomas at home. "There were a load of little things, and it happened that I didn't feel 100 per cent.

"This may sound bad, but I didn't want to go to the Tour de France, not be 100 per cent and just ride for the team," he admitted. "I feel I'm at an age where I definitely want to make the most of all the chances I can get. It felt like the Giro was a better fit for me this year.

"I still feel I'm at a level where I can still perform for myself, and so I didn't want to go the Tour in another role," Thomas said.

The 34-year-old Welshman added that he'd nevertheless been watching defending champion Egan Bernal and his other Ineos teammates at this year's Tour on TV, and wished then every success.

"It definitely feels strange, because I haven't watched it on television since 2009. The boys seem to be okay, and hopefully they can finish it off," he said.

'It's just nice to be back at a race'

Tirreno-Adriatico started on Monday, and runs until Monday, September 14. After two stages, Thomas sits safely within a group of around 140 riders who are all 20 seconds off the overall lead of Bora-Hansgrohe's Pascal Ackermann, who's won both stages so far.

"I feel good," said Thomas. "I knew there would be two sprint stages that would be relatively easy compared to the other days, so I had three easy recovery days before the start after a block of training. I felt a little blocked, but that's normal.

"It's nice to be back in the groove with the boys. You find your rhythm after a while. It's been a while since I did some bunch sprints and tried to stay out of trouble, and so you need to get used to the stress," he said. "The guys have ridden well, and [Filippo] Ganna turns on the turbo and rides on the front until three kilometres to go, so you can't ask for more."

On Wednesday, the riders face a hillier third stage, with an uphill finish in Saturnia, which should see some reshuffling on the GC.

"It's not really a GC day on paper – it's not a mountain finish – but it's a hard, racing course, with a tricky final, so a lot could happen," Thomas said. "The final climb is with 8km to go, or something, so an opportunistic move could work.

"It's similar to the stage I won a few years ago, with a similar run-in," he said, remembering stage 2 to Pomarance at the 2017 Tirreno. "We're going to have to be switched on, up front and ready."

Following this year's Tirreno, Thomas hopes to represent Great Britain at the rescheduled World Championships in Imola, Italy, at the end of September.

"I think I'll ride the TT at the Worlds, but I don't think the team wants me to ride the road race," he said. "We'll see. We'll decide things after Tirreno-Adriatico."

He'll then hope to be in top form for the start of the Giro d'Italia in Monreale on October 3, where rivals for the general classification will include two-time champion Vincenzo Nibali (Trek-Segafredo) and the Italian's former Astana teammate Jakob Fuglsang.

"Vincenzo has won all three Grand Tours," said Thomas. "He's an amazing bike rider – one of the best of his generation – so he could definitely win again. You can never count him out.

"Fuglsang has had some great results this year and last year, so will certainly be good, too," he said of the Dane. "There’s also Simon Yates [Mitchelton-Scott], who was incredible in 2018 and 2019, so I think there are a lot of guys who'll be competitive."