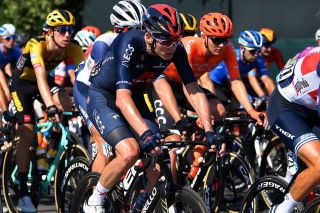 A return instead of a repose for Chris Froome. While the Tour de France peloton paused on Monday for the first rest day of this year’s event, the grand absentee was back in competitive action for the first time since he was deemed surplus to Ineos’ requirements at La Grande Boucle.

Froome finished safely in the main peloton as Pascal Ackermann won stage 1 of Tirreno-Adriatico, where the Ineos line-up also features 2018 Tour champion Geraint Thomas. After missing out on Tour selection, both men are using the race to prepare their alternative targets. Froome will ride the Vuelta a España [October 20-November 8], while Thomas will lead Ineos at the Giro d’Italia.

Speaking to Cyclingnews and La Gazzetta dello Sport before the start in Camaiore, Froome said that he wasn’t entirely surprised or disappointed by his exclusion from the Ineos selection.

“No, not hugely so,” Froome said. “I understand, 100 percent. I could feel myself that I wasn’t where I needed to be.”

Chris Froome: It’s sentimental to race Vuelta a España as my last race with Ineos

Froome will ride for Israel Start-Up Nation in 2021 after agreeing a long-term deal with the squad in July. Although he will be 36 next summer and despite enduring a lengthy rehabilitation after sustaining a fractured femur and elbow at last year’s Dauphiné, Froome's stated ambition is to win his fifth Tour de France in his new team’s colours.

“I wouldn’t have signed up to a programme like that if I didn’t believe it’s possible,” said Froome, who admitted that he drew motivation from being written off. “I enjoy it when people say that. It gives me a bit of extra motivation, but only time will tell.”

Froome raced the Route d’Occitanie, Tour de l’Ain and Critérium du Dauphiné in August as part of his bid to reach full fitness and earn full selection for this year’s Tour, but he has spent less time in the saddle in the weeks since he was omitted from the squad.

“Obviously, since not going to the Tour de France, I’ve reduced the volume a bit of what I’ve been doing on the bike and been focusing a little bit more on building up a bit more muscle strength. Before the Tour I really felt I was missing that top end, that really high-end intensity stuff, and I think trying to gain a little bit of muscle will probably help me build that top end,” said Froome, who, prior to August, had raced just once – at the UAE Tour in February – in the previous twelve months.

“Obviously having had the time off from the Dauphiné last year and through the corona situation this year, I’ve been very light on racing. I’m looking forward to getting a good week of racing in the legs here. This is very much preparation for me towards the Vuelta. And at the same time, I hope I can do a really good job for G [Thomas] who should be in with a chance of fighting for the victory here.”

Tirreno-Adriatico is likely to be Froome’s only stage race between now and the postponed Vuelta a España, which is scheduled for October 20-November 8, and he also ruled out riding the World Championships in Imola on September 27.

“I’m probably going to try to get up to altitude for a couple of weeks straight after Tirreno, but no Worlds for me,” Froome said. “I’m just going to continue focusing on being ready for the Vuelta. Maybe I’ll drop in to one of the one-day races, maybe Liège-Bastogne-Liège or something like that. We’ll see how things progress.”

As in 2019, when he missed the Tour after his Dauphiné crash, Froome found himself watching the main event on television last week. Ineos leader and defending champion Egan Bernal appeared to be struggling at times on the Col de Peyresourde on Saturday but looked rather more assured on the Col de Marie Blanque 24 hours later. He currently trails Primož Roglič (Jumbo-Visma) by 21 seconds in the overall standings.

“It looks like Egan is in good shape. He’s coming right, which is nice to see. Hopefully, the race continues to Paris. We’ll all wait and see what comes from the [coronavirus] testing today,” Froome said. “With Roglic, it’s going to be hard to take back any time from his dominant position at the moment but having said that, [Tadej] Pogacar’s been lighting up the race as well.”

The Briton witnessed the strength of yellow jersey Roglič and his Jumbo-Visma team first-hand at the Tour de l’Ain and the Dauphiné, and he wondered whether the Slovenian would be able to maintain his form all the way to Paris.

“We’ve always seen that Roglič tends to tail off a little bit in the Grand Tours towards the third week and he really was flying at Tour de l’Ain and the Dauphiné before his crash,” Froome said. “It remains to be seen how long he can hold it for. That’s what makes the Tour so exciting.”