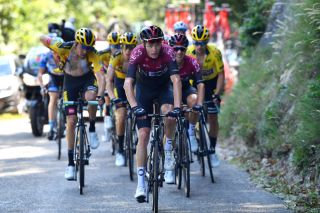 History has a habit of repeating itself so here we are again discussing a decision by Team Ineos manager Dave Brailsford concerning his Tour de France selection. Cast your mind back to 2013 and the brutality of the choice then made that Britain's first Tour winner, Bradley Wiggins, wouldn't be defending his title, instead replaced by Chris Froome who would go onto win that race and three further editions.

Now a similar fate has befallen both Chris Froome and Geraint Thomas, the winners of five of the past seven Tours de France, and, although it may seem surprising, the logic behind the decision does stand up to scrutiny.

Harsh it may be, but professional cycling is rarely an emotional place. Any choice will have been based on what is required to win the upcoming Tour, taking into consideration the current form of the riders and who is best placed to fill the individual support roles that Egan Bernal will need to secure another victory.

Despite all the previous talk of three leaders at the British registered team, Egan Bernal was always going to be the number one by virtue of his win last year, his upward trajectory and the mountainous route which ASO has laid down.

Nowadays, performance data is crucial in establishing how a rider is reacting to competition stresses, so Ineos will have had confirmation of just where Geraint Thomas and Chris Froome sat with their form. That will go over and above the visual information that the Critérium de Dauphiné provided – that neither were stellar and neither looked like they were improving as the days passed by.

In the case of Chris Froome, it was fairly understandable that he might struggle with his return to competition. His recovery from his crash at the 2019 Dauphiné has been remarkable, however don't underestimate the length of time needed to return to the highest level and the effect that age has on how long that may be.

At this year's Dauphiné, he was present until near the end for the first few days, though paid for that initial flash of form and was later destined to be in the autobus. Though that was always going to be a possibility, it's a situation which any former Grand Tour winner isn't used to and not a great thing to go through or witness.

Therefore, it was no great surprise that he hasn't made the Tour selection because his climbing power still needs improving and he's not the type of rider you can ask to rider 100km on the front each day, every day. He's a winner and it's not in their psyche to do that.

Geraint Thomas is a different case and his non selection comes as more of a shock but again, his recent performances haven't been good enough. It's strange as the Welshman has no excuses to his lack of form and he'll be the first to admit that.

The late restart to the season has given everyone who hasn't been injured or sick to prepare for racing with plenty of time. That the level is high ought to be no surprise as every rider has just three months to prove themselves.

Right now there isn't the usual late-in-the-year lethargy that you would normally get after the Tour de France – basically everyone is fresh, raring to go and not in the least tired from any earlier races in the way they would have been. The number of crashes is testament to how nervous everyone is and how all the riders are aware that they have few chances to show themselves.

That Geraint Thomas can refocus on the Giro d'Italia is some compensation but he'll be bitterly disappointed that he hasn't been judged good enough to support Bernal in a Tour where he could have legitimately been a solid back up in the case of something going wrong.

Looking through the Ineos Tour de France team, Dave Brailsford has taken into account that he needs everyone behind Egan Bernal. With Jumbo-Visma setting a very high standard so far all those Ineos riders needed to be at 100 per cent from the very start.

Unfortunately for Thomas, he hasn't shown any signs of that level, and Chris Froome needs more recovery time if he's to reach that kind of form. There's no place for sentiments or friendships when tough calls have to be made though, and this Tour is no exception.

It's one of the worst things as a professional to watch the biggest race of the calendar start without you. Chris Froome has some experience of the feelings involved after his crash last year but for Geraint Thomas it's something new to deal with after being a staple ingredient of Sky and Ineos for so long.

The realisation that the peloton is constantly renewing, that ultimately you're replaceable, and that if you aren't constantly on it then there's someone else who is, can be just the shock needed to focus on the rest of the season.

When you're an unsuccessful candidate for selection, it's a long time sitting at home thinking what could have been though, and that applies to those who expected to be at the Tour and those who hoped they might be.