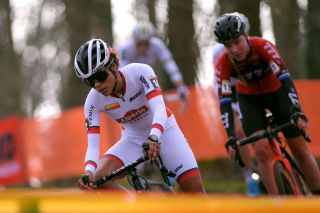 Ceylin del Carmen Alvarado (Alpecin-Fenix) cruelly saw her overall ambitions in the women’s cyclo-cross World Cup go up in smoke due to a crash on the final lap of the final race of the season.

The Alpecin-Fenix rider went into the last round of the World Cup with a slender five-point lead over her closest rival, Annemarie Worst (777), and it looked like the pair would decide the final overall standings in a sprint finish in Hoogerheide.

However, on the final off-camber section of the last lap, with Alvarado starting to stretch her rivals to breaking point, the race turned on its head when the Dutch rider lost her front wheel and her bike cascaded down the slope. To make matters worse, Alvarado was forced to fix her chain before chasing.

In the end she was unable to make contact, as Lucinda Brand took the win and Worst finished second. Alvarado would eventually come over the line in sixth place and lose to Worst in the World Cup standings by a mere 15 points.

"Well, I crashed. That’s obvious," Alvarado told Cyclingnews after the podium celebrations. "It was just a little mistake that I made myself. I was in good form and condition so it’s a bit hard to know that I lost the overall ranking because of my own mistake.

"My front wheel just went a bit down and there was some loose sand. I didn’t have control and then it was over. There was a chance of coming back but, after the crash, my chain dropped. Then it was really over for me. Up until the fall I really had no problems."

Alvarado took the incident on the chin and was keen not to dwell on the matter. With the World Championships taking place in a week, the Dutch rider is well aware that she will need to remain focused on her next major objective.

"I want to cry about it but there’s still a big deal coming up next weekend. This isn’t the end of the world but it gives me great motivation for the Worlds," she said.

"The end of the World Cup also coincided with the news that Alvarado would remain on the Alpecin-Fenix for the next few years after she agreed to a contract extension with the team.

"I’ve re-signed now until 2024. I feel comfortable in the team. Everything is well done and well organized," she said. "I’m happy with them and they’re happy with me."