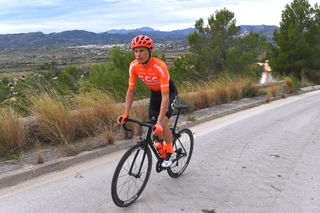 Italian rider Fausto Masnada has made a mid-season switch from CCC Team to Deceuninck-QuickStep. The move was agreed last week but, with the 26-year-old competing in the Critérium du Dauphiné, the signing was held until after the completion of the race.

Masnada is likely to ride the Giro d'Italia later in the season, and it was hoped that he would support Remco Evenepoel until the Belgian crashed and fractured his pelvis at Il Lombardia.

"I'm very happy to join a team of Deceuninck-QuickStep's caliber – one of the biggest squads in the world," Masnada said in a press release on Wednesday. "I want to develop here, continue to grow as a rider and get some good results.

"Joining another team mid-season isn't easy – I have to find my place here – but I'm sure it won't be a problem, as everybody has already given me a warm welcome. I can't wait to sport the jersey for the first time at the national championships in a couple of days," he said, with the Italian title race taking place on Sunday.

Deceuninck-QuickStep boss Patrick Lefevere added: "Fausto showed some impressive things on the climbs in the big races last season, and convinced us with his aggressive style of racing and attitude.

"As we were also looking for riders to reinforce our squad – hit by bad luck in the past weeks – we decided that Fausto would be the perfect fit: a quality rider who we are convinced will bring his contribution to the team's success," the Belgian said.

With CCC Team running out of time to find a new title sponsor for 2021, several riders have already announced moves for next year. Team leader Greg Van Avermaet will move to AG2R La Mondiale along with Michael Schär, while Patrick Bevin is set to ride for Israel Start-Up Nation. Matteo Trentin, meanwhile, has been linked to UAE Team Emirates.

"Without a new title sponsor secured for 2021, contracted riders have been given the freedom to explore other options for the coming season," Masnada's now former team said.

"Fausto Masnada was presented with an opportunity to transfer mid-season to Deceuninck-QuickStep and, after consultation with Fausto, we have agreed to allow the transfer to take place. We have enjoyed having Fausto in the team and wish him all the best for the future."

Masnada, 26, previously rode for Androni Giocattoli-Sidermec before moving to CCC at the start of 2020. He won a stage of the Giro d'Italia last year, as well as two stages at the Tour of the Alps. The Italian was regularly on the attack in the Dauphiné last week, and finished third in the king of the mountains competition.

Masnada is not the first rider to make a mid-season move during the UCI's August transfer window. In 2014, Rohan Dennis jumped ship from Garmin and signed for BMC on the eve of the Vuelta a España, and Carlos Verona – now at Movistar – moved from Etixx-QuickStep to Orica-BikeExchange during the 2016 season.