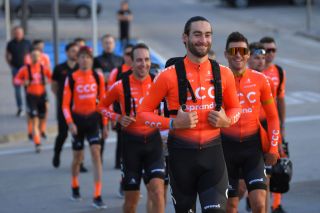 Riders at CCC Team are attempting to fight back against proposed pay cuts, urging their bosses to compromise and meet them 'half-way'.

In early April, the team managed by Jim Ochowicz announced they were suspending the majority of support staff and 'heavily reducing' rider salaries due to the financial impact of the COVID-19 pandemic on title sponsor CCC.

Those pay cuts, however, have not yet been finalised, with the team confirming to Cyclingnews on Friday that negotiations between the riders and team management are ongoing.

Speaking to Italian outlet Spazio Ciclismo, one of the team’s riders, Fausto Masnada, explained they had rejected the proposed pay cuts.

"It is not a positive situation. We riders, together with our lawyers, joined together and made a proposal to the team to meet us halfway," Masnada said.

"The situation, as it was set out by the team, was really critical and it would have been impossible for us to accept their request. At that point, we made a counter proposal and we are waiting for their response."

The team did not confirm whether or not salaries were paid as normal at the end of April, but insisted they were working to have the situation resolved in the coming days.

"I think in the next few days we will have an answer, whether they accepted our offer or not," Masnada said. "If so, hopefully then we can have a defined schedule to start training with a real goal."

CCC Team have been hit hard by the pandemic and the suspension of racing, with various reports in the Polish press detailing the financial struggles of CCC, the Polish footwear company. With stores closed, share prices and revenues have plummeted, with billionaire owner Dariusz Milek cutting costs in response. The team are now operating with a skeleton workforce, with the majority of non-riding staff placed on temporary unemployment.

Last week, Polish financial website Bankier reported that part of the plans to balance the books included "the closure of activities related to sport sponsorship, contracted for 2020-2021". This poses an immediate threat to the future of CCC Team and the CCC-Liv women’s team, whose sponsorship agreements with CCC both covered 2021.

"To date, the intention of the team is to end the season and be present at the races if they resume," Masnada added. "For the future, they still haven't told us anything."

Before the pay cuts were announced, Greg Van Avermaet said he’d be happy to give up a portion of his salary, but hoped that "solidarity" would be reciprocated and that CCC would in turn commit to extending their sponsorship of a team that it itself saved from collapse at the end of 2018.