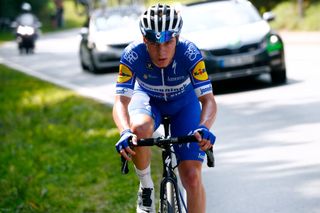 Remco Evenepoel became the youngest male rider to ever win the coveted Kristallen Fiets, the crystal bicycle trophy for best rider of the year. The 19-year-old topped his older Deceuninck-QuickStep teammate Philippe Gilbert and Jumbo-Visma's Wout van Aert for the honour.

Sanne Cant claimed a repeat win in the women's category, with Ilan Van Wilder the best young rider. Tim Declercq was named as the best domestique. Patrick Lefevere gave Deceuninck-QuickStep its third trophy of the night, winning the award for best team leader.

"Such an individual prize is always something special," Evenepoel said, according to Het Laatste Nieuws, which sponsors the competition. "But actually this trophy should be a cake that I can divide into equal pieces. Then I can hand out those pieces to all my teammates. I owe them a lot."

Evenepoel, in his first month as a neo-pro, won the young rider's classification at the Vuelta a San Juan. He then finished fourth overall in the Tour of Turkey, and by June won his first major race, the Baloise Belgium Tour. He soon added a stage of the Adriatica Ionica before winning his first one-day WorldTour race, the Clasica San Sebastian. He followed that up with a win in the European Championships in the time trial and finished second to Rohan Dennis in the world championships time trial.

"It was a very good summer, in which I overwhelmed myself at a lot of times. I am very proud to be rewarded with the Kristallen Fiets."

The Kristallen Fiets has been awarded since 1992. Johan Museeuw has the most victories (5), with Gilbert, Greg Van Avermaet and Tom Boonen winning the next most at four. Can Evenepoel equal them some day?

"I am mainly concerned with the performance on the bike," he joked. "But trophies like this are always nice to get. This Kristallen Fiets is the crowning achievement for a whole year. When I look at my opponents, I consider this trophy to be a big fish."

Cant is the first female cyclo-cross racer to claim the award, which has only had a category for women for the last three years. Jolien D'Hoore won the first two, while track racer Nicky Degrendele won in 2018.

After her 2018-2019 season in which she won both the Superprestige and DVV Trofee series and the Belgian and World Championships, it's a fitting prize.

"I have a nice place in my living room [for the trophy]," Cant said. "I have a glass spectacle that holds my most important trophies. There is another shelf on which the Kristallen Fiets will fit perfectly. I see this partly as a reward for my career. It is not finished yet, but you never know what else can happen. So I am very happy that I already have the Kristallen Fiets in my hands."