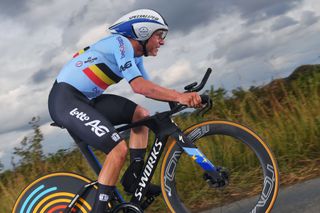 Remco Evenepoel has already secured one of two time-trial places Belgium has for the 2020 Olympic Games, but national selectors now have the headache of selecting who will take the second spot (Image credit: Getty Images)

The selectors for the Belgian national team face a difficult choice when it comes to picking their riders for next year's Olympic Games, with Deceuninck-QuickStep's Remco Evenepoel the only certain name so far on the start sheet for Tokyo next summer.

As reported this week, national coach Rik Verbrugghe has the luxury of Belgium being one of only six teams to boast the maximum five places for the elite men's Olympic road race, and two for the time trial. However, the two time triallists picked also have to form part of the five-man road-race squad, which means it may not be as simple as picking the fastest man against the clock for the final TT place.

According to Het Nieuwsblad, the national selectors will this week begin discussions with the potential candidates for the second time-trial place, with Victor Campenaerts (Lotto Soudal), Wout van Aert, Laurens De Plus (both Jumbo-Visma) and Yves Lampaert (Deceuninck-QuickStep) four of the most likely riders to be handed the spot.

"We're not going to be laying down any new qualification criteria. The selection will be made in May on the basis of a value judgment by the national coach," Belgian Cycling's technical director Frederik Broché told nieuwsblad.be on Tuesday.

The head of Belgian Cycling, Tom Van Damme, added: "A decision will be made based on performance, motivation and enthusiasm. Just because someone wins the Paris-Nice prologue doesn't mean he is therefore the right choice for the time trial in Tokyo."

Evenepoel's victory in the European Championships time trial secured him the first of the two time-trial spots – and as a result one of the five places for the road race. Reigning Belgian time trial champion Van Aert, meanwhile, said last month that, if selected for the other place, he would be willing to work for his teammates in the road race.

"Of course, my rehabilitation is the most important thing," said Van Aert, who's still recovering from the thigh injury sustained in the stage 13 time trial at the Tour de France. "It's up to the federation to contact its best time triallists. I'm not going to call them, and I don't intend to beg for selection."

Current Hour Record holder Campenaerts will make the switch from Lotto Soudal to NTT Pro Cycling for 2020, and being in Tokyo to visit his new team's main sponsors last week gave the 28-year-old Belgian the opportunity to scout out the Olympic time trial course.

"I can tell you that it's tailor-made for the Belgians," he told Het Nieuwsblad at the weekend. "It's very good for me, Remco Evenepoel or Wout van Aert."

This week's discussions between the TT candidates and the selection committee will start the process as to how the national team will look for the summer Games, although the three remaining road-race places are also still up for grabs.

Reigning Olympic road race champion Greg Van Avermaet (CCC Team) would surely be part of the selection, although the very hilly course – which will likely be targeted by the likes of Denmark's Jakob Fuglsang, Vincenzo Nibali of Italy, 2019 Tour de France champion Egan Bernal (Colombia) and potentially four-time Tour winner Chris Froome of Great Britain – is unlikely to give Van Avermaet much possibility of defending his title.

A rider such as Dylan Teuns (Bahrain-Merida) could be the most suitable candidate for Belgium to put their full support behind, with riders such as Lotto Soudal's Tiesj Benoot and Tim Wellens also likely candidates for road-race places.