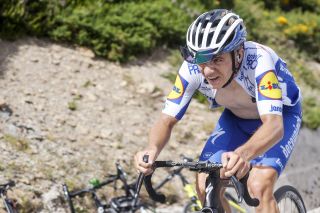 Just 48 hours after his terrifying crash in Il Lombardia, Remco Evenepoel posted a video message thanking his supporters and vowing to come back stronger than ever after he suffered a season-ending fractured pelvis.

The 20-year-old Deceuninck-QuickStep rider appeared to misjudge a sharp left turn onto a bridge on Saturday's descent of the Sormano, one of the steepest and most technical descents in the WorldTour. He hit a low stone wall and fell over the edge  into the ravine, fortunately landing on a steep slope well above a much more precipitous drop.

On Tuesday the Deceuninck-QuickStep team confirmed Evenepoel's pelvic fractured would be 'treated conservatively' and so would not need surgery.

"I just want to say that I'm doing very well for the moment, I've had a good transfer to a Belgian hospital now," Evenepoel said after being flown by private jet from Italy to Belgium for treatment in hospital in Herentals.

Remco Evenepoel expected to travel back to Belgium within 24 hours

"First of all, I want to thank all the people who supported me and helped me in the last couple of hours, starting from the moment of the crash until now actually. Unfortunately, my season is over so far but we have no rush. We have all the time to plan a good comeback, physically and also the stuff around.

"I want to thank the fans, you supported me so much. I could not answer all the messages because there were so many. I see everything and I feel everything. Know that your support touches me and will help me in a positive way. Me and the team are thinking positive and looking forward to next season. We'll take it really slow, really calm and do everything to become a better rider and become stronger than ever before."

Before his crash, Evenepoel, in his second WorldTour season with Deceuninck-QuickStep, won all four of the stage races he started this year, beginning at the Vuelta a San Juan in January and the Volta ao Algarve in February.

Although all racing stopped in March because of the coronavirus pandemic, Evenepoel picked right back up when racing resumed, winning the Vuelta a Burgos and Tour de Pologne.

Back in Belgium after his crash at Il Lombardia, @EvenepoelRemco had a message from the hospital for all those who sent him good vibes in the last couple of days.#TheWolfpackNeverGivesUp pic.twitter.com/NLMa2eqW6NAugust 17, 2020