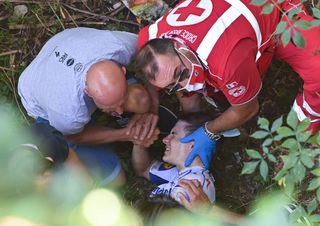 Deceuninck-Quickstep manager Patrick Lefevere says he was watching Il Lombardia in former rider Luca Paolini's parlor when he witnessed the footage of his star rider Remco Evenepoel crashing into a low bridge wall and flinging over and into the ravine - and for the second time this month he was fearing for the life of one of his riders.

"I'm glad that he is still alive," Lefevere said to Het Nieuwsblad.

Evenepoel vanished into the trees near the start of a bridge over the ravine, his bike left standing against the low stone wall that had no protection for the riders. The 20-year-old, lying at the bottom of a steep slope, was quickly reached by medics, fitted with a neck brace and strapped to a backboard out of an abundance of precaution for his spine and then whisked away to the hospital in Como.

"There is good news, he is conscious. But Remco has suffered a pelvic fracture and his right lung is perforated," Lefevere said. "I've seen him, but above all he wanted to reassure his parents and his teammates."

It is clear is that Evenepoel's impressive second season in the WorldTour is over. After he racked up four stage race victories this season, the most recent in the Tour de Pologne, he was due to lead Deceuninck-Quickstep at Tirreno-Adriatico before making his Grand Tour debut at the Giro d'Italia.

"What happens to his season? I don't care, I really don't," Lefevere said. "I'm glad he's still alive. He will have to watch a lot of television this season. He said 'sorry' to me. I said, 'You are still alive. Shut up'."

The descent of the Muro di Sormano where Evenepoel crashed is one of the most technical on the WorldTour circuit. In 2017 Lefevere saw another of his riders, Laurens de Plus, crash into the ravine in a different spot. It was also reminiscent of the crash of another former Quickstep rider, Philippe Gilbert, in the 2018 Tour de France.

Lefevere questioned why the same dangerous stretches continue to be used in the races.

"A little further and and things could have gone even more wrong," Lefevere said. "I have repeatedly told the union [UCI] and organization that this kind of descent is not possible, but nothing changes. I don't even want to talk about it anymore. Crudely said, we could have had two deaths in a week with Fabio Jakobsen and Remco. You can think that racing and winning is important. But when you see your riders flying into a barrier or a ravine, you don't think about that anymore. Then it's pure nonsense."

For the second time this week, the team is now arranging for a private flight for an injured rider to head home. Jakobsen returned to the Netherlands this week - his condition deemed 'a miracle' after he suffered terrible trauma to his face and neck after crashing through the barricades in the opening sprint of the Tour de Pologne.

Evenepoel was in the race with Jakobsen and as he soloed to victory on stage 4, he held Jakobsen's race number up in tribute. Now he too will be flown home to recover.

"There will be a private jet ready to transfer him to Belgium. We don't want to take any chances, so he will stay here for another 24 hours. There are still a few radiological tests to be done, but we want to continue the rehabilitation in our country."

Team directeur sportif Davide Bramati said he hopes the team's bad luck will stop. "Is this descent too dangerous? I don't know. This descent has been used for years and there have been a lot of falls. On the other hand, falling is part of cycling. We had also explored the descent with Remco, we did what we had to do to prepare."