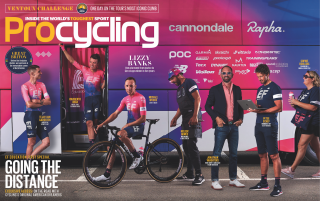 The October 2019 edition of Procycling magazine is out now in UK newsagents and features an in-depth look at the EF Education First team, along with features covering Mont Ventoux, Beryl Burton and Lizzy Banks.

The EF Education First team are one of the WorldTour's most eye-catching and newsworthy teams. They began as a development team in Colorado, then expanded into the top level by promoting themselves as the original 'clean team' at a time when cycling was mired deep in doping scandals.

They've survived mergers and almost disappeared at the end of 2017 when EF Education First came on board as sponsors and bought out the team, and now for the first time are settled in and looking at the long term.

Morton making the most of EF Education First's 'alternative calendar'

EF Education First have never been the most prolific winners in the sport – they've never had the budget to compete consistently with the really big hitters. Yet look back over their history and they've won almost all the biggest races.

Among their honour roll are all of the monuments except Milan-San Remo, with Alberto Bettiol's Ronde van Vlaanderen win this year the latest, plus the Giro d'Italia, as well as second place in the Tour de France with Rigoberto Urán in 2017.

But they've also been one of the most forward-thinking in terms of marketing and promotion. They've hired strong riders, but they also hire interesting riders who thrive in the offbeat atmosphere team manager Jonathan Vaughters has always fostered.

And their latest project has been to attempt to break down the walls separating the road calendar from the rest of the sport by encouraging their riders to take part in the so-called 'alternative calendar' of off-road, enduro and gravel races.

Procycling has taken a deep dive into the world of EF Education First with a special series of features and interviews.

What's in the magazine

During the Tour de France, we sent Fran Reyes to interview Rigoberto Urán. The Colombian is one of the team's figurehead riders and his laid-back and positive approach to life chimes perfectly with the ethos of the team.

Urán explains why he's at peace with the fact that he's managed to come second in three separate Grand Tours and why letting go and not worrying about the pressure makes him race better.

We've also interviewed team boss Jonathan Vaughters, who takes us through the history of the team and talks about the highs and lows along the way.

Despite the team's humble beginnings and the close shave with almost running out of sponsorship at the end of 2017, Vaughters has built a team which is now firmly established in the WorldTour. As he told us in his team's 12th Tour this summer, "We're the longest-running American Tour de France team."

Vaughters told us about what has changed in the team since the beginning, and what has not, and explains why, with Education First he's finally planning for the long term.

EF Education First have featured some big names on their team roster in the course of their history, but the rider who in some ways best symbolises the team is Alex Howes, who recently took the team's first ever US Pro Championships.

Howes has been with the team since he was a junior and Vaughters describes him as an important rider: "He's highly intelligent; individualistic but incredibly selfless."

Howes spoke with Pierre Carrey about the challenging 2018 he endured, with hyperthyroidism, changing the dynamic in WorldTour racing and trying to represent the best part of America: "If I could be a person with the American flag on my back who sets one small good example, that would be nice."

The big story with EF Education First this year has been their expansion into off-road and enduro events. Their Australian rider Lachlan Morton rode in the GBDuro event, a 2,000km bikepacking race from Lands End to John O'Groats.

He won, but the bigger victory was the path of discovery and rediscovery Morton took along the way. We've collated some of the most spectacular images of Morton's ride for an epic and beautiful picture feature.

Beyond EF, we've also got a range of other features in the magazine. We've interviewed rising British star Elizabeth Banks, who only started cycling five years ago and this summer won a stage of the Giro Femminile, arguably the biggest stage race in the world. She talks us through the steep learning curve she has experienced.

Sam Dansie went to watch one of the newest and most eye-catching races on the calendar, the Mont Ventoux Dénivelé Challenge for a fascinating eyewitness account. And finally, William Fotheringham, the author of a new book on Beryl Burton, looks back at the career of Britain's greatest ever cyclist for our regular retro feature.

Procycling October 2019 is available now in UK newsagents and features all of the above, plus in-depth race analysis, stats, stunning photography throughout.

Subscribe to Procycling magazine now, from as little as £3.07 per issue.