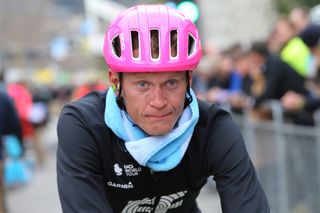 Matti Breschel has had little time to enjoy retirement. Having raced for the last time as a professional at the Bretagne Classic-Ouest France on September 1, the 35-year-old has enjoyed a short trip back home to Denmark to visit family and friends before picking up training for his new role as a sports director for EF Education First at the Vuelta a España later this week.

The 2019 season was Breschel's third season riding for team manager Jonathan Vaughters, with a one-year break in 2017 riding for Astana after his first stint with the US WorldTour squad during the 2016 season. He made public his decision to retire last month due to psoriatic arthritis, which has left him struggling to be competitive.

Breschel announces retirement due to struggle with psoriatic arthritis

Breschel's 15-year professional career began at CSC in 2005, and saw him finish third at the 2008 UCI Road World Championships in Varese, Italy, and second at the 2010 Worlds road race in Geelong, Australia, behind Norway's Thor Hushovd. His victories include a stage at the 2008 Vuelta a España, nine stage wins at the Tour of Denmark and victory at the 2010 Dwars door Vlaanderen. He also twice finished in the top 10 of the Tour of Flanders, and ninth at the 2009 Paris-Roubaix.

"It was totally a no-brainer for me," Breschel said on the EF Education First website regarding being offered his new role as a directeur sportif on the team.

"When I was starting to be in my 30s and had to think, 'What am I going to do afterwards?' I realised that my whole education and my whole life was in cycling, so I'd thought about going in that direction," he said.

"I was really pleased that the team asked me. To be a part of cycling – it's kind of my whole identity. Thinking about it – just jumping off the train – it would have been a weird feeling. So, for me to be able to be in cycling and still be a part of EF and the whole WorldTour thing, it's a big deal."

While his young family might have expected him to now be at home more often, taking a staff role on the team allows a gentler transition into 'civilian life'.

"I have three kids, and I haven't really explained it to them yet," admitted Breschel. "They think that Daddy is stopping and is going to be more at home, but that's not the case. I do think it's good for me and good for my family that I keep travelling a bit. Otherwise, I think I would go crazy."

Breschel will head to the Vuelta on Thursday, where he'll "watch over the shoulders" of sports directors Juan Manuel Garate and Ken Vanmarcke to start the learning process of becoming a DS.

He admitted to being initially nervous about driving a team car, but was certain that he'd soon get the hang of it.

"It shouldn't be a problem," said Breschel. "I've heard that you just have to get used to eating a lot of bad sandwiches. I'm really looking forward to it."

He added that he's particularly looking forward to working with some of the team's younger riders.

"I want to get a little bit more aggression out of the guys," he said. "As a young professional, I remember, you can be a little bit lost sometimes in the big WorldTour circus, and sometimes it only takes a phone call.

"I've experienced many sports directors who have kind of forgotten how it is to be a bike racer," Breschel said. "I'll try not to forget myself. The job of a sports director today demands a lot. It's all about using the right words, pushing the right buttons, working with negative thoughts sometimes and trying to turn them around to something positive.

"It is difficult, because you are working with people and not machines, but that's the interesting part, I think."