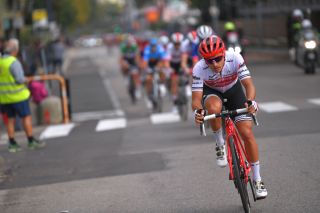 The Trek-Segafredo team has announced that Gianluca Brambilla will stay with the American WorldTour as it builds for the future and works to support Vincenzo Nibali, Richie Porte, Bauke Mollema and world champion Mads Pedersen.

The men's and women's Trek-Segafredo teams gathered at Trek's headquarters in Waterloo, Wisconsin this week to plan and prepare for the 2020 season.

Brambilla is the 27th rider confirmed in the Trek-Segafredo men's line-up for 2020.

Under new UCI rules, men's WorldTour team are obliged to have a minimum of between 28-30 riders. With Trek-Segafredo also signing several neo-pros, including Britain's Charlie Quarterman and the Junior road race world champion Quinn Simmons of the USA, the team need to add three further riders to its roster to respect UCI rules.

Trek-Segafredo has so-far added ten new names to its 2020. Joining alongside Nibali are is his brother Antonio, Kenny Elissonde from Team Ineos, Denmark's Alexander Kamp from Riwal Readynez, Latvia's Emīls Liepiņš, neo-pro Michel Ries, Quarterman ands Simmons. Junior time trial world champion Antonio Tiberi will join the team in 2021 after a season as an under 23 rider.

While Pete Stetina has confirmed he will leave Trek-Segafredo for a still to be confirmed destination, the USA's Kiel Reijnen is in the 2020 roster and forms the backbone of the team along with Koen De Kort, Ryan Mullen, Classics leader Jasper Stuyven and Toms Skujiņš. John Degenkolb will move to Lotto Soudal in 2020, with Pedersen stepping up in the Classics squad as he races in the world champion's rainbow jersey.

"Of course, I am happy to be staying with the team. I’ve been in the Trek family for two years already, and staying for another year means that the team believes in me, and I believe in the team’s philosophy and objectives.

"I’m looking forward to racing with the strong new riders in the team, especially racing with Vincenzo. I’m ready to support him to take some good victories. Next year I want to be back to winning. I don’t mind which races, but I really want to win," Brambilla said.