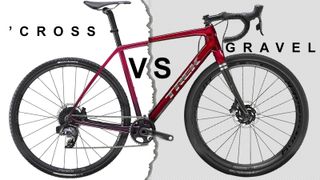 Riding drop-bar bikes in an off-road setting is nothing new but recently more cyclists are venturing off the beaten path to get away from traffic and explore new roads. Gravel riding as a concept has become hotter than a habanero and drop-bar bikes now possess enough space for fatter tyres.

According to the data from the Bicycle Product Suppliers Association Sell-in Report from 2018, the uptick in gravel cycling is more than just a casual observation. In fact, gravel bikes carried a large portion of the eight per cent growth in dollars spent on 'road bikes.'

Until recently, cyclo-cross bikes were the weapon of choice for an adventure that took in a combination of some tarmac and gravel roads with possibly even a dollop of singletrack. But as the gravel concept has grown and developed over the past several years, so has the need to develop purpose-built bikes for the task at hand, and so, gravel bikes were born.

From the same strand

'Cross bikes and gravel bikes share the same DNA and, at first glance, you may think a cyclo-crosser and a gravel grinder are more or less identical. You wouldn't be far wrong in that assessment; they both have room for wider tyres, possess disc brakes and drop bars. But when you place each bike in their natural habitats, the differences quickly become apparent.

Jordan Roessingh, Trek's Global Director of Road Product and Project One said: "If you're looking at a cyclo-cross bike, it's a race bike. Cyclo-cross courses have a lot of sharp turns, there's a lot of acceleration, and you need to pedal through most of the corners. So, the handling characteristics are pretty unique and specific to the courses at hand.

"Conversely, most of the gravel infrastructure involves straighter roads, and there isn't much in the way of turns and corners. From a rider perspective, you don't need to pedal through a corner and accelerate immediately out of it because a lot of gravel events are longer in duration - they don't have nearly the same intensity. The geometry variances between the bikes themselves aren't miles apart, but a few millimetres here and a degree there can drastically change the bike's character and ride quality."

Specialized Road Category Leader Stewart Thompson added: "Bottom-bracket drop is probably the most noticeable geometry figure we've adjusted, providing the most benefit to the rider. With a lower bottom bracket on the Diverge, you get incredible stability on the bike. This is a benefit when descending on tricky roads. With a higher bottom bracket on a pure CX bike, you get a livelier feel and can change direction a bit easier but lose out a bit in terms of stability at higher speeds or cornering."

It's all about stability

Gravel bikes are designed to maximise stability, and the lower bottom bracket makes it feel like you're 'in' the bike rather than on top of it; the way your weight is positioned over the front axle is part of the formula for handling characteristics.

Your average cyclo-cross race lasts between 30 and 90 minutes, whereas a gravel event like the Dirty Kanza takes about 10 hours if you're at the sharp end of the race. Both Thompson and Roessingh point out that each of their respective brand's gravel bikes possesses a few millimetres extra stack height for a slightly more upright riding position.

"In a gravel bike we tend to favour stability, whereas on a cyclo-cross bike, generally, you want the bike to be much faster to respond to what you're doing, and so that trail figure tends to be significantly different between the two. Your front-centre might be the same between those two bikes, but the way that the front wheel flops based on how you're leaning the bike is really dramatically different," says Roessingh.

The other headline difference comes in the form of the tyres, with 'cross bikes being largely limited by UCI rules which allow for a max 33mm width. Gravel bikes are only bound by how much room there is in the frame.

"On the CruX, we optimised the geometry around a 33c tyre but from there we added as much additional clearance as we could, while still fitting proper 1x or 2x chainrings. This resulted in tyre clearances for a 38-40c tyre depending on the exact rubber and rim combo. The result is that we have ample mud clearance with 33c tyres for pretty much any race situation," says Thompson.

"On gravel, and with the Diverge, we made tyre clearance the focal point of that bike. Our carbon Diverge has clearance for 700x42c tyres which allows riders a ton of flexibility on the size and setup. By centring the handling geometry around 700x38c tyres, we've been able to balance the handling needs regardless of whether you run 28c, 42c or anything in between," he continues.

With room for up to a 40c tyre and beyond, most gravel bikes are also compatible with 650b wheels and a 2.0in tyre. The smaller, gravel wheels and wider tyres create a bigger contact patch for purchase on loose corners and steep climbs, while the additional tyre volume allows for lower pressures enabling the carcass to better conform to bumps in the riding surface. That said, 700c feels more agile for changes in speed and will be subject to lower rolling resistance.

Beyond the headline differences in the frame and geometry, gravel and cyclo-cross bikes also differ in specification levels. Again taking into account the difference in distance and duration of a cyclo-cross race vs your typical gravel ride or event; the latter has provision for bottles, racks, and fenders — there was a time when you would struggle to find a CX bike that had even one bottle mount.

Gravel bikes usually have a wider gear range because the terrain is going to vary more than the suburban parks where CX races are usually held.

"Any of the terrain changes that you might have are probably pretty short within a cyclo-cross course; you can likely muscle up in a bigger gear. In the US and Europe, we have a ton of terrain for gravel, and a lot of that terrain is super steep, so people value having a really low gearing," Roessingh says.

Gravel bikes may also have flared drop bars, a dropper post and some even have suspension, whether that be integrated into the frame like Specialized's Future Shock, Trek's ISO Speed Decoupler or Cannondale's Kingpin suspension or a suspension fork like Fox's AX or the Lauf Grit.

Even with these differences, the fact remains you can still take a CX bike on a gravel adventure, and you'll definitely survive a 'cross race on a gravel bike. So it begs the question do we really need two separate categories?

When asked, both Roessingh and Thompson said unless you're planning on racing a lot of cyclo-cross events, opt for a gravel bike.

"Gravel bikes as a category can sort of do everything pretty well. So if you want it to be a road bike, it's a pretty good road bike. If you want to be a commuter bike, well it has all the mounts for racks and fenders. It provides versatility putting a really big tyre on it so if you want to ride some singletrack or if you want to go onto gravel roads, whatever you can put the biggest tyre on it that you want," says Roessingh.

When you look at mountain bikes, different categories of bikes suited to specific styles of riding emerged long ago because as riding pushed into more extreme terrain, the bikes needed to follow suit. Roadies have historically been a bit slower on the uptake of new technology — just look at disc brakes — and the advent of gravel bikes is the latest evolution, spurred on by riders looking to push their bikes further past the end of the pavement.