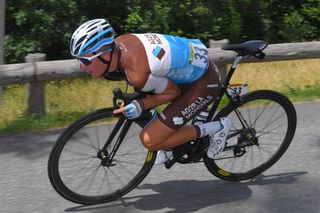 Rising French talent Benoît Cosnefroy has signed a three-year contract extension at AG2R La Mondiale, keeping him at the French team until at least the end of 2023.

Cosnefroy turned professional with AG2R just before he won the U23 road race world title in 2017. Last year was something of a breakthrough, featuring victories at Paris-Camembert, GP Plumelec, La Polynormande, and Tour du Limousin, while he started 2020 with wins at the GP La Marseillaise and Etoile de Bessèges.

The 24-year-old puncheur has an attacking approach to racing that has seen him tipped for success in the hilly and even cobbled Classics.

"Extending my contract with the AG2R La Mondiale team means that I am choosing continuity and ambition. Getting a three-year contract is a great sign of trust from the team’s management and its partners," Cosnefroy said.

"The whole project is motivating. I feel a real expectation around me. It’s a pressure that pleases and motivates me. The communication between everyone is very good with an interesting exchange of perspectives. I now want to win a one-day UCI WorldTour race and my dream would be to win an Ardennes classic."

The next Julian Alaphilippe? Benoit Cosnefroy makes his mark

Cosnefroy joined AG2R after graduating from the team's development set-up, Chambéry Cyclisme Formation, where he'd gained a place after hitchhiking to the Alps from his home in northern France to submit his application.

As one of the most promising young French riders, he's seen as a key part of the team's future and, with the future of Romain Bardet up in the air, manager Vincent Lavenu was keen to secure Cosnefroy's services.

"We are very pleased to extend our contract with Benoit Cosnefroy, especially for three years. It was an important goal," Lavenu said.

"He is a talented rider, who comes from our region since he was trained at Chambéry Cyclisme Formation. And he is not afraid to express his ambitions. We are ready to accompany and help him to achieve his objectives."

Bardet, however, has yet to confirm his future, with recent reports linking him to Team Sunweb, while the future of Pierre Latour, the team's secondary Grand Tour leader, is similarly undecided.