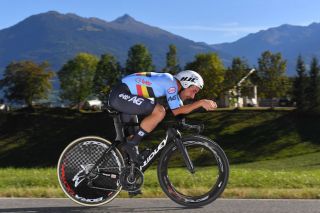 Victor Campenaerts has told the Belgian media that he thinks that two, or even three, Belgians might be able to make it onto the podium at the elite men's World Championships individual time trial this week.

The 54km test takes place in Yorkshire, in the UK, on Wednesday, with current Hour Record holder Campenaerts representing Belgium along with 19-year-old Remco Evenepoel – the current European time trial champion – and the recent winner of the Tour of Slovakia, Yves Lampaert.

Campenaerts names 2019 Vuelta a España winner Primoz Roglic (Slovenia) as one of the biggest favourites for the title, while he'll also be up against reigning TT world champion Rohan Dennis of Australia.

Great Britain's Geraint Thomas, meanwhile, has ruled himself out of the time trial, but will still compete in Sunday's road race.

"I rate Roglic highly, and Evenepoel has developed into a top rider in all areas," Campenaerts told VTM Nieuws, according to HLN.be.

"But I think I belong on that podium. Why not two, or even three, Belgians? The course couldn't be better suited to Yves [Lampaert], and he's in top form.

"But I also really like the course. It's going to be fun for the fans to watch, and I hope to do just as well as last year," said Campenaerts, who finished third at the 2018 World Championships in Innsbruck, Austria, behind Dennis and the Netherlands' Tom Dumoulin, with the latter not attending this year's Worlds.