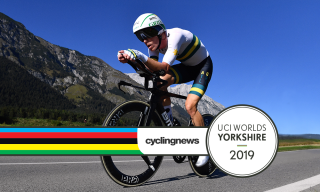 While the 2018 men's World Championship time trial in Innsbruck turned out to be a one-sided affair with Rohan Dennis comfortably beating Tom Dumoulin, the 2019 edition, held in Yorkshire, looks to be a far more open and unpredictable race.

Last year, Dennis took home the rainbow jersey after beating Dumoulin by 1:21 in Innsbruck. This time around, there looks to be four main favourites for victory on the 54-kilometre course which runs on a rolling course from Northallerton to the Harrogate circuit on September 25 – plus a number of outsiders.

With time trials through the season rarely venturing over the 30km mark – Giro d'Italia, Vuelta a España and select National Championships aside – the Worlds will be the longest TT any of the competitors have raced since last year's race in Innsbruck.

The absences of last year's runner-up and 2017 champion Dumoulin, plus Chris Froome (third in 2017) and Michał Kwiatkowski (fourth last year) will be felt, while Geraint Thomas is also unsure about participating. Nevertheless, there's still a strong and competitive lineup for the premier time trial test of the season.

Primož Roglič (Slovenia) is the in-form man and the stand-out favourite heading into the World Championships. He's set to compete in all three races (mixed relay, time trial, road race) throughout the week, but the time trial represents his best chance to medal.

The 29-year-old heads to Yorkshire off the back of his first Grand Tour victory at the Vuelta a España, a win built off the back of a time trial win in Pau. There, he beat Patrick Bevin (CCC Team) by 25 seconds and took minutes out of his closest GC rivals.

Earlier in the year he won the final time trial in the Tour de Romandie, beating Victor Campenaerts (Belgium) by a sizeable 13 seconds over the short 17km course en route to the overall title. Later on in the same month, Roglič took two time trial victories at the Giro d'Italia, finishing on the final podium in Verona.

Clearly the outstanding time trialist of 2019, Roglič will be riding high, on-form and confident in his abilities.

Fatigue could play a part though, with the Slovenian having completed two Grand Tours for a total of 63 race days, with a 64th to come in the mixed relay event just days before the individual time trial.

After a triumphant 2018 season which saw him win six individual time trials on the way to his victory in Innsbruck, 2019 has been a totally different experience for Rohan Dennis.

The Australian heads to Yorkshire with a single TT win under his belt – at the Tour de Suisse, where he edged out Maciej Bodnar and Michael Matthews by less than a second on the 9.5km course. He ended up second overall but, so far, at least, his 2019 season will be remembered more for his Tour de France abandon than anything else.

Dennis hasn't raced since leaving the Tour on stage 12 to Bagnères-de-Bigorre, which was rumoured to be related to disagreements with his Bahrain-Merida team over equipment and skinsuits. It's hard, then, to get a real idea of where his form is.

He deserves a nod based on reputation alone but it'll be a case of wait and see when he rolls down the start ramp next Wednesday.

Another rider who hasn't been seen since the summer, Victor Campenaerts can already look back on his 2019 as a job well done regardless of the result in Yorkshire. Back in April, the 27-year-old accomplished the greatest feat of his career so far, setting a new UCI Hour Record with a distance of 55.089km.

On the road, he has two victories in 2019 – one at the closing time trial at Tirreno-Adriatico, and a stage at the Baloise Belgium Tour in June, just before his elongated summer break. Campenaerts would have one more win to his name but for a botched wheel change at the Giro's San Marino TT, a stage he lost to Roglič by ten seconds.

With five race days in his legs since then, and 38 in total so far in 2019, he certainly seems among the more well-rested of the TT contenders, though the Hour Record big and large block of altitude training early in the year accounts for that.

Twice a European champion in the time trial, the Belgian has enjoyed a steady progression at the Worlds. His debut at Qatar 2016 saw him take 26th, before a 16th in Bergen and then bronze medal last year. Yorkshire might just see him take the next big step up.

Drawing towards the end of his first professional season, 19-year-old Remco Evenepoel has already confounded expectations with five victories, including the WorldTour one-day Clásica San Sebástian and the Baloise Belgium Tour.

His ride at the European Championships in August earns him a spot on our favourites list.

Evenepoel has previous too, winning junior TT titles at national, European and world level last season. He also built a reputation for long solo rides, something he's carried over in the pro ranks. At Adriatica Ionica Race he won stage 3 with a 30km solo ride and raced over 100km on his own on stage 2 at the Deutschland Tour.

Still, at just 19 years old, the 54km time trial in Yorkshire might be a bridge too far at the end of a long season. Evenepoel started racing at the Vuelta San Juan back in January and has 51 race days in his legs. Still, after what he's achieved so far this season it's tough to rule anything out.

A first timer at the Worlds time trial at the late age of 33, Geraint Thomas will nevertheless be right up among the favourites for victory in Harrogate after opting in to participation upon his return from the Canadian WorldTour races.

That fact is something of an oddity given his long-standing strength in the discipline – back in 2010 he finished tenth in the closing Tour de France TT and two years later took second at the closing Giro d'Italia time trial.

Great Britain's strength in the discipline is a major reason for Thomas having stayed away. It's tough to get picked when the likes of Bradley Wiggins, David Millar, Chris Froome and Alex Dowsett have been filling the two time trial spots for years, after all.

However, Thomas has emerged as one of the premier time trialists in the world with a host of podium spots at WorldTour and Grand Tour time trials in recent years. In 2017 he won the Tour's opener in Düsseldorf, and he was British National Champion last year.

One question mark hanging – perhaps the only one – over Thomas is his racing level, with just six days in his legs since he finished second at the Tour. But then again, he faced the same questions before the Tour, and ended up best of the rest after teammate Bernal.

Best of the rest

No rundown of World Championship time trial contenders would be complete without mentioning Tony Martin (Germany). The four-time world champion, who took the latest of his titles at Qatar 2016, hasn't won a WorldTour time trial since the 2015 Tour de France and crashed out of the Vuelta a Espana on stage 19 but his pedigree can never be ignored.

This season, Martin has two time trial podium places, at the Volta a Valenciana and the ZLM Tour, and he's been German time trial champion in each of the past three seasons. After a long, hard season largely spent working for the GC ambitions of Roglič and Steven Kruijswijk from the spring to the Tour and Vuelta, can he make it back on top?

Kasper Asgreen (Denmark) has been one of the revelations of the 2019 season, his first full year at WorldTour level for Deceuninck-QuickStep. After a surprise second place at the Tour of Flanders, the Dane took third at the Tour of California, winning a tough stage at altitude along the way.

Since then – and more relevant to the Worlds time trial – the 24-year-old has become Danish TT champion and also took second at the European Championships behind Evenepoel. Asgreen clearly has a knack for the discipline it seems – but challenging for the win at the Worlds? It might be too soon.

Chad Haga (USA) enjoyed a breakthrough this season, winning the closing Giro d'Italia time trial in Verona. The Texan beat Campenaerts by four seconds over the 17km course to take his first WorldTour victory. He'll be partnered with Lawson Craddock and should represent the USA's best chance of taking a good result at his debut Worlds TT, even if a medal looks a long shot.

Vasil Kiryienka (Belarus) is one of the more consistent World Championships performers around, finishing in the top ten every year since 2012. The 38-year-old took the rainbow jersey at Richmond 2015, and podiumed in 2012 and 2016. This season he won the European Games in his home country, though the competition will be tougher in Yorkshire.

Kiryienka's Ineos teammate Jonathan Castroviejo (Spain) is another consistent rider, if unspectacular. The Spanish national TT champion took sixth last year, and has finished third and fourth in past Worlds. He has an outside shot at a medal, as does Nelson Oliveira (Portugal), who has finished fourth and fifth in each of the past two years.