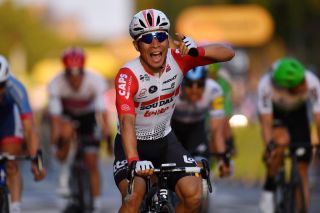 Caleb Ewan is eyeing an opportunity to take the first yellow jersey of the 2020 Tour de France following an exemplary debut in which he won three stages this year. The 107th edition of the race starts in Nice, France, around the Australian sprinter's European training roads.

Sprinters have arguably been negated in the ASO's quest to devise courses that provoke more dynamic racing, the mass exodus of pure fast-men, who missed time cuts at the 2018 Tour, an example. However, Ewan (Lotto Soudal) has not been discouraged as he readies for a new season campaign. He is likely to mimic his 2019 race schedule that also included the Giro d'Italia where he won two stages.

"I was at the Tour presentation and the Tour looks really hard but for every team, they take their best guys to the Tour and if there is only one sprint stage for me to win, then the team will still take me and hope that I win that one stage," Ewan said.

"There should be five or six opportunities... There should be an opportunity to take the yellow jersey on the first day in Nice, which is always a bonus for sprinters. It’s all on my training roads as well so that will be nice starting the Tour here actually."

The 25-year-old Australian was the new, fresh face of Lotto Soudal in 2019 following a four-year tenure at Mitchelton-Scott, which he moved on from to compete at the Tour de France, replacing Andre Greipel. Veteran Greipel had offered to work as part of Ewan's lead-out at Lotto Soudal but the German champion said he wasn't asked so decided to take his own chances at Arkea-Samsic.

Ewan is considering a return to the Giro d'Italia next season, the Grand Tour that he believes currently offers sprinters the most.

"The Giro I haven’t looked at properly. I was speaking to someone briefly about it and I think they said there are maybe six sprint stages in the first half. I need to look at it more closely and speak with the team but maybe that’s an option again," he said.

Asked if he thought ASO were beginning to alienate sprinters with their race routes, the seven-time Grand Tour stage winner said "a little bit", but also saw the lighter side, humouring a joke about French bias.

"I think they can’t forget about us. We’re still here and it will be a shame if they eliminate sprinters any more because I think we’re going through a really exciting period for sprinters," Ewan said.

"It would be a shame if they kept cutting down sprint stages in the Grand Tours. The Vuelta has cut down most of theirs. The Giro is the only one really that has kept a lot of flat stages, which is nice.

"The Tour is hard next year and hopefully there will be more sprints the following year,” he continued.

"I think they’re [ASO] looking for more exciting racing and maybe racing where guys like [Frenchman Julian] Alaphilippe [Deceuninck-Quick-Step] can win. Maybe we just need a French sprinter to start it going and then there will be some more sprint stages!"