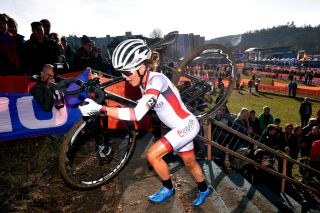 Britain's Anna Kay (Experza Pro CX) will attempt to defend her lead in the under-23 women's competition at round 5 of the 2019/20 UCI Cyclo-cross World Cup in Koksijde, Belgium, this weekend, but has admitted that she needs to be "more aggressive".

That's despite having this season taken third place in the elite women's race in round 3 of the World Cup in Bern, Switzerland, in October, followed by second place in the U23 race at the recent European Championships to young Dutch star Ceylin del Carmen Alvarado, who's also one of her most dangerous rivals in the race for the U23 World Cup title.

Kay finished seventh in round 4 of the World Cup in Tabor last week, which means that she sits fourth overall in the elite rankings, and leads the U23 standings by 30 points over CCC-Liv's Inge van der Heijden going into round 5. Alvarado is a further 19 points off the pace, but has only raced the last two rounds of the World Cup, and finished second in both of them.

In an interview with Kay published on the UCI website on Thursday, the 20-year-old British rider admitted that she enjoys racing against the more experienced elite athletes.

"It's not so much pressure, because I'm still young, and I try to enjoy those opportunities," she said. "The first time I was on the start-line with [cyclo-cross world champion] Sanne Cant, I was scared. And thrilled. I feel like I can learn from them.

"Mostly, I look at the lines and risks they take to overtake rivals, how aggressive they are. I can also see how focused they are and how they approach the race," said Kay, who also finished fourth at the elite women's national championships road race in 2018, and eighth in the same race this season.

"I need to be more aggressive," she continued. "Last season was harder for me. I was starting further back and I had to fight my way through to the front. Now it's easier. Technique-wise, I'm good with my cyclo-cross skills, but I need to work on being more aggressive to defend my position."

Reaching the halfway point of the nine-round World Cup series in Koksijde this weekend, Kay – who's coached by now-retired British cyclo-cross rider Helen Wyman and her husband Stef – is clear on what her goals are for the rest of the season.

"It would be really cool to keep the leadership in the U23 World Cup, and to do well at the Nationals [in Shrewsbury in January], and get a podium at the Worlds," she said, with the latter taking place in Dübendorf, Switzerland, in early February.

"I wasn't expecting this; I've achieved more than I thought I would," admitted Kay, who will heads off on a two-week training camp in Calpe, Spain, after racing in Koksijde. "It feels great."