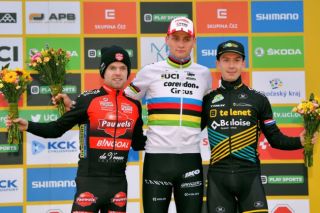 Pauwels Sauzen-Bingoal's Eli Iserbyt (left) could only finish second to Mathieu van der Poel (Corendon-Circus) at the Tabor round of the 2019/20 UCI Cyclo-Cross World Cup, but retained his overall lead in the competition (Image credit: Getty Images)

Dutch riders Mathieu van der Poel (Corendon-Circus) and Annemarie Worst (777) dominated the weekend's European racing in their respective elite men and elite women's events at both the fourth round of the UCI Cyclo-cross World Cup in Tabor, in the Czech Republic, on Saturday, and at the Flandriencross in Hamme, Belgium, on Sunday.

It was an emotional Van der Poel who won in Tabor, having lost his grandfather, and cycling legend, Raymond Poulidor on Wednesday. The 24-year-old Dutchman chose not to celebrate the win coming across the line as a mark of respect and remembrance.

"It’s been a very tough week. It’s very hard. I’m glad that I’ve won but it’s been much harder than I thought it would be – both physically and mentally, it was tough," Van der Poel told reporters after beating World Cup leader Eli Iserbyt (Pauwels Sauzen-Bingoal) and Lars van der Haar (Telenet Baloise Lions).

Iserbyt retains the overall lead in the competition, extending his lead over Telenet Baloise Lions' Toon Aerts to 35 points with four rounds of the nine-round World Cup series completed.

Despite Worst's second World Cup win in as many races, Katerina Nash (Luna) did enough to hold on to her overall lead in the women's competition, in spite of her lowly 18th-place finish. Similarly, Canada's Maghalie Rochette (Specialized-Feedback Sports) keeps her second place in the standings, 21 points down, after finishing down in 16th.

Worst put in a dominant ride to finish well clear of Corendon-Circus rider Ceylin del Carmen Alvarado and Worst's own 777 teammate Yara Kastelijn, the day before Worst won again at the Flandriencross round – round 2 – of the DVV Trofee in Hamme, in Belgium, by just three seconds from world champion Sanne Cant (IKO-Crelan), with Alvarado third, another three seconds back.

In the men's Flandriencross, Van der Poel this time allowed himself a victory celebration when he took the win ahead of Pauwels Sauzen-Bingoal's Laurens Sweeck and Creafin-Fristads' Tim Merlier, with the previous day's World Cup podium finishers, Van der Haar and Iserbyt, taking fourth and fifth.