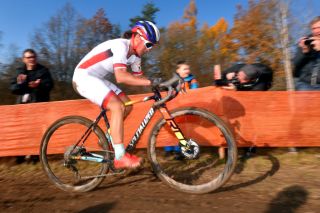 World Cup leader Katerina Nash (Luna) in action on home soil in round 4 of the 2019/20 UCI Cyclo-cross World Cup in Tabor, in the Czech Republic (Image credit: Getty Images)

The sandy cyclo-cross circuit in Koksijde, Belgium, hosts round 5 of the 2019/20 UCI Cyclo-cross World Cup on Sunday, and marks the mid-way point of the nine-round series, with the elite men's and women's standings led by Pauwels Sauzen-Bingoal's Eli Iserbyt and Luna's Katerina Nash, respectively.

Mathieu van der Poel (Corendon-Circus) will once again line up as the favourite for the men's race in Koksijde, and has the added confidence on his side of having won the past two editions of what he's called one of his favourite races.

The 24-year-old only recently returned to the discipline at the Superprestige series in Ruddervoorde on November 3, promptly winning the race and going on to win round 4 of the World Cup in Tabor, in the Czech Republic, last Saturday, followed the next day by victory in the Flandriencross round of the DVV Trofee.

And while his dominance will be hard to break over the coming months, Van der Poel has already said that the World Championships in Dübendorf, Switzerland, on February 2 will be his last 'cross race of the season, where he'll nevertheless attempt to defend his title ahead of knuckling down to another road season.

The chances of him topping any of cyclo-cross's three major competitions, with Van der Poel's late start and early finish, therefore, remain slim, although Iserbyt will no doubt have a few sleepless nights as the Dübendorf Worlds approach.

The Belgian currently tops the World Cup standings with 310 points, 45 points ahead of compatriot Toon Aerts (Telenet Baloise Lions), with Iserbyt's teammate Michael Vanthourenhout in third place, another 27 points back. Van der Poel is 24th, with his 80 points for having won in Tabor.

In the elite women's race in Koksijde, Nash will have her work cut out against the likes of last round's winner in Tabor, Annemarie Worst (777), who could be at her best in the sand, and Ceylin del Carmen Alvarado (Corendon-Circus), who took second in Tabor, and will again be among the favourites after her fourth place in Koksijde last year.

Round 6 of the World Cup takes place in Namur, Belgium, on December 22, while round 3 of the Belgian DVV Trofee series is in Kortrijk on November 30. The Superprestige series, meanwhile, is on a break until Zonhoven – round 5 of the competition – on December 8.