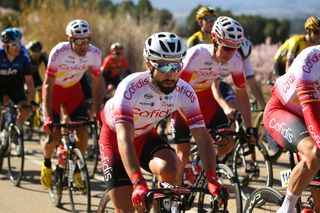 Cofidis sprinter Nacer Bouhanni is looking forward to a new chapter in his career after joining Arkéa-Samsic for the 2020 season (Image credit: Getty Images)

Nacer Bouhanni is ready to hit the ground running with his new team, Arkéa-Samsic, in 2020. After five seasons at Cofidis – where it was rarely smooth sailing for the last two years, as the French sprinter and incoming manager Cédric Vasseur rarely saw eye-to-eye – Bouhanni is happy to be starting a new chapter in his career.

Arkéa-Samsic prepare for key 2020 season with Quintana and Bouhanni

"I want to turn the page on the past two seasons and focus on next year," Bouhanni told L'Equipe on Sunday.

"My main goal will be to start winning again as quickly as possible," said the 29-year-old, whose last victory was a stage at the Vuelta a España at the end of 2018. "After a winless season, that's my priority, and the start of the season is going to be important for both my confidence and in terms of getting to know my new teammates.

"I was in contact with a number of other teams, but I decided to come to Arkéa-Samsic because I always had a very good feeling about [team manager] Emmanuel Hubert. I need to evolve in a climate of confidence, and that's what guided my choice. I'm looking for serenity," said Bouhanni.

"I'm confident that Nacer will be able to get back to his best," added Hubert.

"He's proven in the past that he knows how to win races, and major races, too," he continued, referring to Bouhanni's 65 career wins, which include stage victories at the likes of the Vuelta, the Giro d'Italia, Paris-Nice and the Critérium du Dauphiné, as well as the French road-race title in 2012.

According to L'Equipe, Bouhanni will start his season at the Saudi Tour on February 4, followed by the Tour of Oman in mid-February and, once back in Europe, the one-day Kuurne-Brussel-Kuurne on March 1, followed by Tirreno-Adriatico.