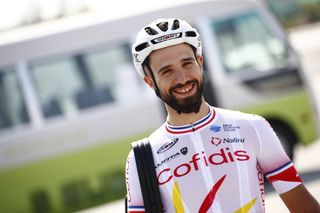 Arkéa-Samsic announced on Wednesday they have signed French sprinter Nacer Bouhanni to lead their sprint squad for 2020. Bouhanni steps in as German André Greipel terminates his contract after a disappointing season.

Bouhanni leaves Cofidis after five seasons. The 29-year-old has struggled with consistency, being left off the team's Tour de France squad in 2018 and 2019. His performance was hampered by a serious crash in the 2017 Tour de Yorkshire that left him with a concussion and damage to his optic nerve.

Arkéa-Samsic general manager Emmanuel Hubert hopes the team can instill some more confidence in Bouhanni and bring out the talent that earned Bouhanni a trio of stage wins in the Giro d'Italia and Vuelta a Espana.

"In 2020, we want to be like a World Tour team. We know that 70% of the races end up in a sprint; we had to strengthen the team in that department," Hubert said in a team press release.

"For a sprinter, every detail matters and I will rely on Sébastien Hinault to coordinate. Nacer Bouhanni will be our number one sprinter. He has huge qualities. He has been through two difficult years, he must regain confidence and bond with the riders who will launch his sprints."

The team has also brought on Dan McLay from EF Education First, who previously raced with the organisation when it was known as Fortuneo-Vital Concept in 2016 and in 2017 as Fortuneo-Oscaro. McLay will be the final lead-out man for Bouhanni. Also joining the squad is Thomas Boudat from Direct Énergie, Christophe Noppe and Benjamin Declercq from Sport Vlaanderen-Baloise, and Łukasz Owsian from CCC Team.

"I think there is a good potential chemistry between the two," Hubert says of Bouhanni and McLay.

"We aim to be competitive on several fronts. Thomas Boudat will have all the freedom to express himself. I believe we are presenting a full group with great sprinting potential. Our riders are ready to work a lot this winter to put the everything in place and be efficient on race days."

"I am very happy to race for Arkéa-Samsic in the coming seasons. For me, it's a new beginning. I will start the season as if I had never won anything. I did not ask to come with a specific staff or specific riders, I want to focus on myself, for the rest I trust the management of the team," he said.

"I've had significant falls and disappointments over the course of my career, but cycling is my life. I am passionate! I have been riding since I was 6. Riding brought me a lot, I could not give up. When I was doing well as a young rider I would head 'Bouhanni has had results this year but next season we won't hear about him anymore.' I grew with that, it's part of me. I respond to criticism on the bike, that's what I do."

Bouhanni has struggled with a 'bad boy' image throughout his career. He was penalised for hitting a QuickStep rider in the 2017 Tour de France and injured in a physical altercation with hotel guests during the French championships in 2016.

He admits he has "character" and made some mistakes during his career, but says he is not a bad guy. "At first glance I am rather reserved, even shy, yet I like contact. I immediately had a good feeling with Emmanuel. It played a big part in my decision."

Bouhanni's first aim is to get back to winning, and then he dreams of filling the missing gaps in his palmares – a stage of the Tour de France and a result in Milan-San Remo. "This year is the first year I haven't won as a pro. I want to get back to my winning ways and grow with the team."

The Frenchman is far from the first high-profile signing the team has made during this offseason, with Giro and Vuelta winner Nairo Quintana joining from Movistar along with his brother Dayer, from Neri Sottoli-Selle Italia. Diego Rosa joins from Team Ineos, while Winner Anacona also makes the move from Movistar. finally, French champion Warren Barguil has extended his contract with the team for three seasons.