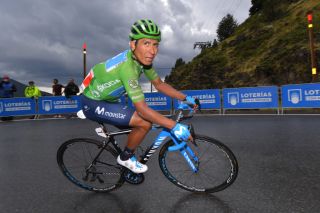 Nearly fifteen years have come and gone since the Breton squad Bretagne-Jean Floc'h took its first, very cautious, steps in professional cycling in 2005. But, while developing a solid reputation as a middle-ranking French Pro Conti squad since then, there can be no doubt that the team, now known as Arkéa-Samsic, is moving into a whole new ball game in 2020 with the arrival of two headline signings, Nacer Bouhanni and Nairo Quintana.

It's true that André Griepel, after a fleeting and lacklustre single year's appearance in Arkéa-Samsic colours in 2019, has moved on. And Warren Barguil has provided a timely reminder of his talent with a victory in the French Nationals and tenth in the Tour despite injuries blighting his first half of the season.

But, six months on, the squad has massively raised its stakes for high-level success by signing a triple podium finisher of the Tour de France, as well as taking a punt on an erratic, but talented, French sprinter for 2020.

"This is a turning point for the team. We started a process of 'internationalisation' when we signed Warren [Barguil] in 2018 and now with Nairo it's another step in that direction," Emmanuel Hubert, team manager, tells Cyclngnews.

On the surface, there are parallels between Bouhanni and Quintana  given they are both seeking new challenges after spending lengthy periods of time in their previous squads. Both, too, will turn 30 next year.

But the comparisons between the French sprinter are only valid up to a very limited point. Bouhanni's rollercoaster late spell in Cofidis saw him win one WorldTour race in the last two years, a stage of the 2018 Vuelta. That said, even if he was winless in 2019 with a runner-up spot in the Grote Prijs Marcel Kint in May his last top three finish, taking five other victories in 2018 is hardly a total to be sneezed at.

Meanwhile the Colombian climber, whilst failing to make the podium in a Grand Tour since the 2017 Giro, has taken stages in the Tour de France, Tour de Suisse and the Vuelta a España (which he also led for a day) in 2018-19, as well as securing runner-up spots in Paris-Nice and the Volta a Catalunya.

"Nairo has almost always been with Movistar, but on a personal level, he needed to change to a new team for new challenges and new responsibilities. From our point of view, that process could help bring our team up to a wholly new level to the one it's at right now," says Hubert.

"As for Nacer, these last few years have been pretty difficult for him. He wants to kick-start his career and get winning races, above all. And I know he's been training hard so this is a good opportunity for him to get moving again."

Hubert himself was briefly a pro in the 1990s, first in 1995 with the ill-fated Le Groupement squad. When that team dramatically folded mid-season, he rode under a 'neutral' French Federation-backed team for the rest of the year, which did not stop him becoming the best French neo-pro of the season, with wins in the Tour de l'Ain, Tour de l'Avenir and a fifth place in the GP Plouay.

Hubert then raced for two years with French squad GAN alongside stars of the ilk of Chris Boardman, Ronan Pensec and Stuart O'Grady, before retiring. He then went into business management but returned to cycling as a directeur sportif for Agritubel in 2005, before joining his current team, then known as Bretagne-Schuller, in 2010.

A decade further on, the question that will doubtless quickly raise its head for Arkéa-Samsic in 2020 is how much support – in terms of riders – it will give to its sprinters, and how much to its climbers in a Grand Tour.

There is no lack of different opinions on the subject, with Ineos/Sky one top team that has ruled out sprint interests (with the exception of Mark Cavendish in 2012) in the Tour. Other big modern-day Tour squads, most notably Jumbo-Visma with Dylan Groenewegen and Stephen Kruijswijk this year, clearly believe it does their chances no harm whatsoever.

"Nairo, Warren and two or three more mountain riders should be enough for a GC battle on the climbs," says Hubert. "As for the sprinters, that depends a lot on the stages, next year's Tour de France is very mountainous and that will maybe make it more complicated for for them. So it's a question of working out how we tackle that but further into the season.".

That is, assuming the team gets to race in the Tour in July, though they have done every year since 2014, and with far less high-level firepower. "Concerning Nacer, Warren and Nairo, there's no doubt that they'd be there in our Tour de France line-up," says Hubert. "But Nacer has had some complicated seasons recently, so he has to tap into his old knack of winning races."

When it comes to  the pros and cons of Arkéa-Samsic not being in the WorldTour, Hubert says, "We already knew that the current system, which evaluates performances over three years to decide who got in the WorldTour, would make it complicated for us." (This year, Arkéa netted five victories in total, none in the WorldTour and the most important being Barguil's National Championships title, while he also took tenth overall in the Tour de France.)

"But we have to take the positive aspects of our absence from the WorldTour, use it as motivation to try and progress and challenge the WorldTour teams in the races where we are going to participate. Riders won't be taking anything for granted or be able to think that just because we have a Barguil or a Quintana or a Bouhanni in the team, everything's going to be straightforward."

The flip side of not being  in the WorldTour, he recognises, is "not knowing what races we are going to be in at WorldTour level, which is why I often ask race directors to give us a straight 'yes' or 'no' as soon as they possibly can. That way we can let our riders prepare their year as best they can."

Getting a spot the Tour is, predictably, a big goal for Hubert's team, but he says they won't be resting on their laurels.

"I am very confident about our chances for the Tour, but nothing can be taken for granted. I'm not assuming anything at this point in time, or any point before it actually happens."

In any case, the Tour is still a relatively long way off, and with 12 new riders in his squad – although Team EF sprinter Dan McLay already raced with the team a couple of years back – right now Arkéa-Samsic will be looking at how to begin the build-up for the season, rather than overly obsessing with wildcards.

"The entire team will have a get-together in the third week of November in Britanny and then from the 9th-22nd December we'll be in Calpe, Spain and then another part of the team will return to Calpe in January. That way the new riders can get to integrate in the team."

Contrary to previous media reports it's not yet certain which race Quintana – said to be taking part in the Colombia Tour – will use to start his season. "We've had lots of requests from race organisers.  There's a big chance he'll be in Colombia but we've yet to decide. As for the rest of the squad, including Bouhanni, we'll start looking at the race program this week."

Regardless of where Quintana and co. start their season, 2020 should be  a landmark season for Arkéa-Samsic. And there's no denying that with the new-look team, expectations will be higher than ever.