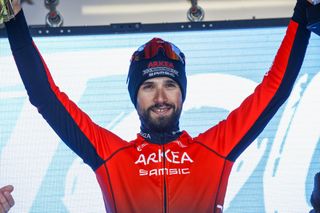 When you're a sprinter fighting to salvage your career and even Warren Barguil is willing to bounce shoulders and rub elbows for you, you know you're onto a good thing. The unexpected rebirth of Nacer Bouhanni at Arkea-Samsic continued this afternoon in the south of France when the 29-year-old took the first stage and the leader's jersey in the opening stage of the Tour de la Provence, in the Camargue seaside town of Saintes-Maries-de-la-Mer.

Bouhanni's rejuvenation at the Breton team is now in full flow with his latest success coming hot on the heels of his stage win in the Saudi Tour. It wasn't all plain sailing, as he initially wasn't even scheduled to be in Provence but instead at the cancelled Tour of Oman. But then again, with Bouhanni, things very rarely are straightforward.

Badly positioned with 300 metres to go he had to freestyle his way to the front, passing his lead-out man and putting his head down. Despite that, it proved a convincing win, ahead of Jakub Mareczko (CCC) and Giacomo Nizzolo (NTT ProCycling), but with stage 2's clifftop finish at La Ciotat/Les Cretes, he acknowledges that he is unlikely to hang onto the race lead for more than a day.

Nacer Bouhanni: I'm ready to ride wherever, with whomever

"We'll be on terrain (on stage 2) which is better suited to other riders than me. Warren (Barguil) and Nairo (Quintana) will want to test themselves and fight for the overall. I'll look ahead to the stage finish in Aix on Sunday, where I live," he said.

Maybe there is still time for Bouhanni, whose stock had once fallen so low that his career seemed teetering on oblivion, to reassert his place among the very best sprinters in stage racing. His talents have never been disputed but his temperament and relationship management have all too often been characterised as catastrophic.

The adjective punchy was invented for Bouhanni. His many bust-ups are now the stuff of legend and have long overshadowed his successes. Even the French media labelled him 'the [Mike] Tyson of the peloton.'

There was the fight with 'drunk' hotel guests on the eve of the French nationals in 2016 which cost him a ride in that year's Tour de France, then a punch thrown at a rival on stage 10 of the 2017 Tour. All that aggression and surliness reached a nadir during the 2018 season when an unhappy spell with Cofidis led to a violent altercation with team sports director, Roberto Damiani, and non-selection for the Tour.

Bouhanni really didn't like Cofidis. "For two years, I lived a nightmare, a hell," he said of the French team. The bitter personality clash he endured with team boss Cedric Vasseur even drew in teammate Christophe Laporte, and ensured that once again Bouhanni had to move on.

Now at Arkea-Samsic, he is having a renaissance of sorts. Marcel Kittel, once his bête noire, is long gone and Mark Cavendish — well who knows what Cavendish will achieve this season? — is himself making a comeback of sorts. There are younger sprinters now to contend with, but Bouhanni's ambition appears intact and for once, relations with his teammates seem sound enough — for now.

So, he has pledged himself to work for Barguil and Nairo Quintana in the next two stages, both with a heavy climbing emphasis. "When you see one leader working for another, it makes you give your best. Our team is in top form."

Perhaps he is thinking too of Sunday's closing stage to the four-day Provencal race, culminating in an almost certain sprint on the Boulevard de la Republique, not very far from where Bouhanni now lives and another ideal moment for him to strike while the iron is hot.