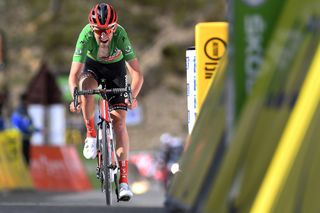 Tiesj Benoot's late attack on the final stage of Paris-Nice might have failed to overhaul race leader, and eventual winner, Max Schachmann (Bora-Hansgrohe), but the Team Sunweb rider still came away from the week with a stage win, second overall and the points jersey.

The race, shortened by one day in response to the Covid-19 coronavirus pandemic, was only Benoot's third with his new team, Sunweb. Both he and teammate Michael Matthews have shown their good form during the race, but the spread of the virus and subsequent race cancellations look set to derail what could be a promising Classics partnership.

"It's a shame, but it's not the end of the world," Benoot told Sporza, referring to the cancellations that have wiped the rest of March's cycling calendar and threaten April too.

"We shouldn't complain about force majeure. It's a shame that I can't go to the Classics with these legs, but there's nothing I can do about that. Other riders will curse it more than me."

Benoot's Paris-Nice result represents a breakthrough in stage racing at this level, it being the first time he's finished on the podium of a WorldTour stage race after fourth places at Tirreno-Adiriatico and the Tour de Suisse in the past two seasons.

The 26-year-old gave credit to his new team, saying that after this result, he's sure that he made the right choice to move on from Lotto Soudal, despite doubts from onlookers.

"I'm on a high level," he said. "During my training camp in Tenerife I polished up some details, and I took a step forward this winter.

"My team has had a positive influence. I'm happy that the choice I made this winter, about which there was a lot of doubt from the outside, was the right one."

At Paris-Nice, Benoot was caught out in the crosswinds on stage 2, losing 33 seconds to Schachmann on the road to Chalette-sur-Loing. Otherwise, though, he barely put a foot wrong, finishing third on the crosswind-hit opener and then limiting his losses in the time trial.

Friday's stage 6 saw Sunweb impress all day, with stage 4 time trial winner Søren Kragh Andersen on the attack, Benoot leaving behind an elite group over the final hill to win by 22 seconds, and Matthews taking the sprint for second after a strong ride.

Valdeblore La Colmiane was his last bid for overall victory, surging clear of the favourites group just outside of the final kilometre. A 12-second advantage over Schachmann on the line plus six bonus seconds moved him closer to the German, but still 18 seconds away from the race win.

Benoot said after that he did all he could, though, which was clear to see as he slumped over his bars for some time after the finish.

"Where I should have attacked a little earlier on the final climb? I thought about it myself," he said. "I got a nice lead quickly, but then it was still. This is my best result in a stage race, and therefore a step higher.

"I came second in Paris-Nice and won a stage. It's already beautiful for me. There are many riders who also made a lot of effort and have not yet been rewarded."

Like the rest of the peloton, though, Benoot's main spring goals have been thrown into turmoil by the coronavirus pandemic. E3 Harelbeke, Gent-Wevelgem and Dwars door Vlaanderen have already been cancelled, while the Tour of Flanders and the Ardennes Classics will likely to be among the next to go.

"I'm waiting for everyone," Benoot said of the organisers of those races in question. "The ASO have proven they'll push things to the limit to let a race go on.

"But I'm going to celebrate this victory with friends and family first. I can't go to the bar, but I have some drinks at home.

"After that, it's up to the team to decide on my programme. Originally, the Amstel Gold Race and Liège-Bastogne-Liège were on it, but no decisions have been made yet."

That's a wrap on #ParisNice🇫🇷 after what has been a great week of racing for us.😃 Check out our gallery from today for some behind the scenes pictures of all the action.📸https://t.co/4kqUOJPhTq pic.twitter.com/aSpP64OuZwMarch 14, 2020