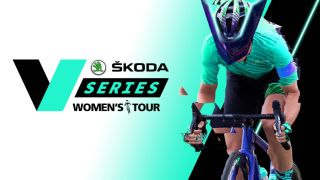 Organisers of the new SKODA V-SERIES Women's Tour have announced that the three-stage virtual event set for June 17-19 will be broadcast live on BBC Sport. The top riders and teams will race each stage on the RGT Cycling virtual platform in support of Breast Cancer Now and Mind.

The racing will be broadcast live at 7 p.m. BST / 2 p.m. EDT for each of the three stages through the BBC Sport website, app and BBC iPlayer. Commentary and expert analysis will be provided by Women’s Tour commentators Marty MacDonald and Olympic Champion Joanna Rowsell Shand.

Race organiser SweetSpot have already announced 15 professional teams that will take part in the event, including FDJ Nouvelle Aquitaine Futuroscope, Trek-Segafredo and Bigla-Katusha.

Trek-Segafredo have announced that they will field US National road champion Ruth Winder, Tayler Wiles and Lotta Henttala.

"Having the opportunity to participate in the Virtual Women’s Tour will be a nice change to the monotony the riders are experiencing at home these days with no racing in the immediate future. The stages have something for everybody, and we tried to assemble a team that can compete well in all of them," said the team's director Ina Teutenberg.

"We’re still in the early stages of the preparation for the re-start of the season, but this event will give the riders some welcomed motivation. We want to be competitive in every single stage."

SweetSpot announced last month that it was forced to cancel the Women's Tour, which was originally scheduled to take place in June, due to health and safety precautions surrounding the COVID-19 coronavirus pandemic. Organisers plan to return to the Women's WorldTour calendar in 2021.

The event will open on June 17 with a 38.4km stage to Bury St Edmunds in Suffolk.

Our opening stage of the @SKODAUK V-SERIES Women's Tour will be on familiar terrain in Suffolk on Wed 17 June.Here's a look thanks to @relivecc on the route to Bury St Edmunds we'll be using on @rgt_cycling 🚴‍♀️#WomensTour #VSERIES pic.twitter.com/gk3zPYcuFaJune 2, 2020

The second stage, on June 18, will offer a 35.7km race to Burton Dassett in Warwickshire, where the participants will tackle the 1.7km ascent three times.

Our second stage of the @SKODAUK V-SERIES Women's Tour will see the route and gradients of the climb of Burton Dassett recreated on @RGT_cyclingRiders will be tackling this route ⬇️ with three ascents of Mount Dassett ⛰️#WomensTour #VSERIES pic.twitter.com/iM7eZQ4gUpJune 3, 2020

The racing will conclude on June 19 with a 35km circuit race held on a one-kilometre loop through the business district of Canary Wharf, London.

We'll be finishing the @SKODAUK V-SERIES Women's Tour on @RGT_cycling with 35 laps of the Canary Wharf circuit. Always a popular event during @TourSeries this should be a spectacular finale 😍 #WomensTour #VSERIES pic.twitter.com/cYpUQYteM3June 4, 2020