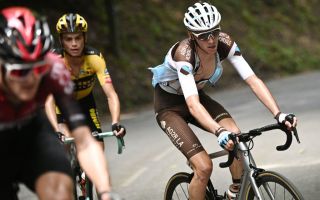 Despite the fact that both riders will move on to pastures new in 2021, AG2R La Mondiale manager Vincent Lavenu has stuck with Romain Bardet and Pierre Latour as his two co-leaders for this year's Tour de France squad, which was announced by the French WorldTour team on Monday.

Bardet decided to miss the Mont Ventoux Dénivelé Challenge earlier this month in order to recover from a crash at the Route d'Occitanie at the start of August. He returned to racing at the Critérium du Dauphiné, and appeared to find his legs again with ninth place on the final stage to Megève, and sixth place on the overall, which pleased Lavenu and gave Bardet peace of mind.

"Romain showed great strength during his return to the Dauphiné, which reassured him," his manager said in a team press release. "He regained his status as a top contender. He will be the leader of the team, which will be around him to aim as high as possible. He can be ambitious. We know that Romain is a diligent racer and he can achieve great things."

Bardet's good form, and Lavenu's resultant enthusiasm, appears to have elevated him a little more in the co-leadership role that he is to share with Latour, who returns to the Tour for the first time since 2018, when he won the white jersey as the race's best young rider.

"Pierre worked well during the training camps, and we know his physical qualities," Lavenu said of the 26-year-old Frenchman, who finished a lowly 70th overall at the Dauphiné. "We hope that the Dauphiné will have served him to gain momentum for the Tour de France. He has shown in the past that he is capable of competing with the best, and, if all goes well, he is definitely able to shine in the mountains and in the time trials."

While Bardet will move to Sunweb for 2021, and Latour has a new home with Total Direct Energie, Lavenu has retained the services of 24-year-old all-rounder Benoît Cosnefroy and 29-year-old Classics specialist Oliver Naesen for the next three seasons. Both riders will also feature in the squad for this year's Tour, and could both get their opportunity to take stage wins.

"Benoît is the puncheur of the team," said Lavenu. "He knows how to win. He just has to put himself in a position where he'll have the chance to raise his arms in victory at the Tour. He has the level for it.

"We hope his back worries are behind him so that he can be at the top of his game," he added. "He has matured, he is clear-sighted, and he is capable of having great success at the Tour de France.

"Oliver acts as our comprehensive insurance on the flatter, as well as the more rolling, stages," said Lavenu of Naesen. "He is a high-quality athlete, and very valuable to the team. He is very important when we are positioning the leaders, especially when the wind is blowing heavily.

"He can be a great leader as well as a great teammate, and he deserves to raise his arms in victory. This year, the Tour will also serve as a launching pad for him at the Flandrian Classics."

The team is completed by 2015 Tour stage winner Alexis Vuillermoz, who should be able to help Bardet and Latour in the mountains, as will the experienced Mikaël Cherel, while 2019 Giro d'Italia stage winner Nans Peters and Clément Venturini will make their Tour debuts.

"We are going to start this Tour de France with ambition but humility and without pressure," said Lavenu. "Romain Bardet, our leader, has proven that he is back among the best riders in the peloton. So we are approaching this event with serenity.

"We are here to aim for the best overall finish possible. Nothing should be out of reach," he added. "We can also aim for stage victories with riders like Oliver Naesen, Alexis Vuillermoz and Benoît Cosnefroy. Clément Venturini and Nans Peters will be racing the event for the first time, but they, too, are capable of great things."