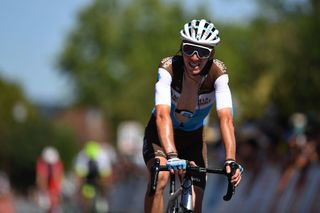 "A question on 2020? Thank you very much!" Romain Bardet exclaimed a few minutes into his video press conference on Tuesday afternoon, when questions about his transfer to Sunweb had subsided, giving way to a discussion of the Critérium du Dauphiné, which gets under way on Wednesday.

With the bulk of this pandemic-interrupted season still to come, Bardet was reluctant to cast his mind forward to 2021, but he could surely understand the interest in his future, not least because the stars of French cycling have long tended to spend entire careers on one team.

As L'Équipe pointed out on Tuesday morning, the last French transfer of comparable magnitude was Laurent Jalabert's switch from ONCE to CSC back in 2001. Jalabert, of course, was already on a foreign team, so perhaps Bardet's move has more in common with Laurent Fignon's 1992 departure from Cyrille Guimard's Castorama to Italian squad Gatorade.

"It's still 2020, so I'm not going to go into detail on the subject, but let's just say that it's a career choice. I wanted to have an experience abroad, in a new environment," Bardet said when asked to explain why he was leaving AG2R La Mondiale after spending his entire professional career at Vincent Lavenu's team.

"Quite simply, it's a new experience. I was coming to the end of my contract with the team and it was time for me to consider giving a new dimension to my career path. I'm very happy to join Sunweb, but before that, I still have a big season ahead of me with AG2R La Mondiale."

Bardet's arrival at the German-registered and Dutch-managed Sunweb was formally announced on Monday morning, but his exit from AG2R La Mondiale has felt a distinct possibility since at least last summer, when he struggled to 15th overall at the Tour de France, a disappointment that was barely mitigated by carrying the polka-dot jersey to Paris. He endured several dark nights of the soul along the way, most notably after losing ground on the first summit finish at La Planche des Belles Filles, when he reportedly told teammates that he felt "ashamed" of his performance.

On the second rest day of that Tour, Bardet spoke of a desire to make fundamental changes to his approach and his race programme in 2020.

"I can't go on like nothing happened," he said last year, and he was originally set to eschew the Tour this year in favour of the Giro d'Italia and Olympic Games, only for the calendar to be redrawn due to the coronavirus pandemic.

The seeds of change had by then already been sown. Bardet's presumed transfer to Sunweb has been touted for several months, although the Frenchman insisted on Tuesday that there was no one episode that had convinced him to call time on his nine-year tenure at AG2R.

"It just came along. There wasn't a key moment," Bardet said. "From the beginning of my career, I had this aspiration of one day having an international experience. The criteria were there to make it happen in 2021 and 2022, so it was a natural decision that was mulled over for many years."

In 2016 and 2017, Bardet had placed on the podium of the Tour and come closer than anyone since Fignon in 1989 to breaking France's long drought at La Grande Boucle. In the following years, however, the Brioude native's stretch for marginal improvements at the Tour seemed to lead only to strain. Sunweb took care to note on Monday that no decision has yet been taken on his race programme in 2021. Bardet, for his part, insisted that he is giving no thought to next season when this year's Tour is a mere 18 days away.

"I'm focused on 2020. We'll talk about 2021 from January 1," he said. "I'm still fully an AG2R La Mondiale rider, and I intend to enjoy these last few races and these last few months with this team."

Bardet resumed his 2020 season at the Route d'Occitanie 10 days ago, where a solid eighth place overall was achieved following a heavy crash on the second stage. Despite his injuries, he limited his losses on Egan Bernal (Team Ineos) to just over a minute on the key summit finish on the Col de Beyrède, although he was later forced to miss the Mont Ventoux Dénivelé Challenge.

"I'm still not fully recovered from my crash at Occitanie; I still have quite a lot of rib pain," Bardet said. "But my condition and my health are good enough to participate at the Dauphiné. These are race days that I really need to reach top form, and the parcours is very interesting this year, so I'm very happy to be at the start."

The rescheduled Dauphiné, reduced to five days on the revised calendar, features four mountain stages and a tough opening leg for puncheurs. The route may be abridged, but Bardet described it as the "hardest that I've seen" and it will offer, he admitted, a very necessary block of work ahead of the Tour given his travails at the Route d'Occitanie.

"I'm neither worried nor confident: I'm realistic," Bardet said of his pre-Tour form. "Because of my crash, I didn't have a good feeling in Occitanie, so I hope to get into good form during this race, and especially this weekend, if I can improve day by day. After that, we will be almost in the finishing straight of the lead-in to the Tour. All the best riders are here and it's going to be important to be able to gauge myself against the opposition."

Bardet saw Team Ineos' strength in depth first-hand at the Route d'Occitanie, and he also watched Jumbo-Visma's striking show of force at last weekend's Tour de l'Ain. Both squads will have their respective troikas of Tour contenders on hand at the Dauphiné. Bardet is conscious that this week – and, no doubt, in September – it will require ingenuity as much as raw strength to compete in a race where the terms are likely to be dictated by Roglic, Bernal et al.

"You have to be clever and go under the radar rather than be a direct adversary of those two teams, who are going to try to control the race from start to finish," Bardet said. "There will be a lot of tactics, but they are clearly the two biggest teams on paper. When you see the composition of those teams, it's pretty crazy."