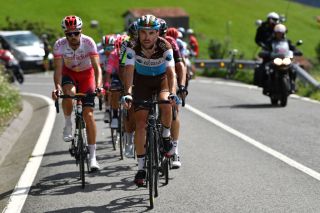 Pierre Latour has confirmed that he will be leaving AG2R La Mondiale at the end of this season having signed a two-year deal with Total Direct Energie.

“Bearing in mind the time that I’ve been with this team and, prior to that with the CCF [Chambéry Cyclisme Fondation, its feeder team], I felt like it was a good time to try something different and part ways,” the 26-year-old Frenchman said in the Route d’Occitanie stage three start town of Saint Gaudens.

The move will see Latour, the best young rider at the 2018 Tour de France, step down from WorldTour level to join the ProTeam squad managed by Jean-René Bernaudeau. The Frenchman insisted he should still be able to participate in the races that are most significant for him, including the Tour and the other major stage races in France.

“Jean-René came to see me and I really liked what he had to say,” Latour explained. “I really like to be in a position where I can race aggressively all the time and I think that I will have the chance to do that there and to get a bit more pleasure out of racing.”

He said he wasn’t unhappy at AG2R, but that moving was a way to get out of a rut, to give him new motivation. “It’s not the case that I don’t enjoy being on this team, but when you spend a long time doing the same things you do start to get a bit tired of it. Being in a different set-up with a different way of working should be a good thing,” he affirmed.

“I’m still focused on riding a good Tour de France for this team and, as it will be one of the last races I’ll do for them, I want to do all that I can to be at my best and get a good result.”

Crashes at the San Sebastian Classic in 2018 and the UAE Tour in 2019 have left Latour with something of a crisis of confidence.

“I’m coming back bit by bit. I’m still a little bit wary on the descents, but that’s improving too and it will come back with time,” he said, adding that his ambition looking ahead is “to win as many races as possible”.

He also hopes that by getting a little more freedom when racing, he will rediscover his GC potential in time. “When it comes to three-week stage races, I still struggle a bit when it comes to GC, whereas in week-long races I do feel more comfortable. I’ve still got a hurdle to across at the Grand Tours before I can really be seen as a contender,” he said.