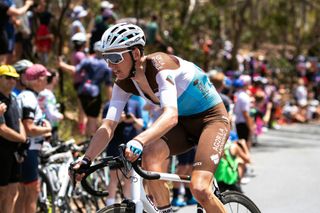 Having originally planned to side-step the Tour de France to broaden his horizons at the Giro d’Italia, Romain Bardet is set to ride his home Grand Tour in 2020 after all, given the rearrangement of the racing calendar on Wednesday.

After placing a disappointing 15th at last year’s Tour de France, Bardet made the decision to skip the race in 2020 and focus on the Giro, Olympics, Vuelta a España, and World Championships.

With all racing suspended until July due to the coronavirus pandemic, it was announced on Wednesday that the Tour de France will take place from August 29-September 20, followed immediately by the World Championships.

The Giro is set to take place soon after in October, with the Vuelta pushed into November.

Speaking to reporters in a conference call following the announcement, AG2R La Mondiale team manager Vincent Lavenu started by saying there was a “strong chance” Bardet will be at the Tour before saying it’s “essential” for the team that he is.

“Initially, we had it programmed so that he would discover the Giro in May, but the calendar has been turned upside down by the events we’re all going through, and that has opened up new perspectives,” Lavenu said.

“It will be an important moment for social and sporting life, that it takes place, and it will be very important for teams to shine there. Effectively, we need to be at the start at full strength, and knowing that Romain Bardet is, evidently, the leader of our team, it’s essential that he’s at the start.”

Lavenu also pointed out that the Tour de France ties in with one of Bardet’s original objectives, the World Championships, which take place on a hilly parcours in Switzerland on September 27.

“The Worlds road race will take place a week after the Tour, which is practically perfect,” Lavenu said.

“We know that riders come out of the Tour in very good form – albeit tired – so I think whoever wants to do well at Worlds has to ride the Tour.”

As for the possibility of riding two Grand Tours, Lavenu says the proximity of the Tour, Worlds, and Giro means riding the Giro will be "complicated" for Bardet, but that "combining the Tour and Vuelta is more feasible".

Lavenu said it was "too early" to set out ambitions for Bardet or the rest of the team at the rescheduled Tour, but he insisted the team would fight for the general classification and stage victories.

"It’s too early to put a number on it – we have to simply appreciate this moment and the fact there’s a good chance the Tour de France will take place," Lavenu said.

"We’re going to do everything to take a competitive team. Romain is our team leader who has two podiums and a polka dot jersey, but we’re not going to put a number on it today."