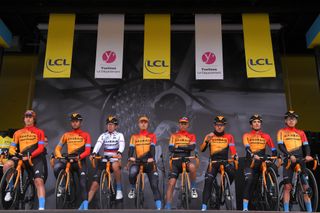 Bahrain McLaren line up for the start of the 2020 Paris-Nice (Image credit: Getty Images)

Bahrain McLaren announced on Wednesday that they're the latest team to join the newly launched Digital Swiss 5 – a series of five virtual races on sections of the same parcours planned for the now-cancelled 2020 Tour de Suisse. The five races are going to be held on the eSports platform Rouvy, and take place from April 22-26.

"The Digital Swiss 5 is an initiative that has been launched by the organisers of the Tour de Suisse, Velon and the eSports platform Rouvy in response to the Covid-19 challenge," read a press release.

"For our team, it will bring several benefits, including partner exposure, fan engagement and a new challenge for those riders participating."

Three riders per team will be competing over the five days of virtual racing. Each race will run for one hour per day, and teams have the option of changing the three riders for each race.

The series will be broadcast live on TV and online, and fans will also be able to take part in virtual events planned around the racing.

The pro teams' rider line-ups are expected to be announced in the coming days, along with the five race routes.