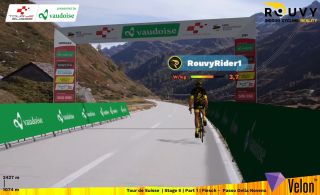 Velon has announced that some of the biggest teams in the men's WorldTour will compete in a series of eSport races in late April, using the Czech-based Rouvy indoor digital platform and racing on the most challenging parts of the 2020 Tour de Suisse race route.

Called the 'The Digital Swiss 5', Velon said the five-hour, three-rider team races will be held between Wednesday, April 22-26 – the dates when the Ardennes Classics were scheduled.

Those races have been postponed due to the growing lockdown across Europe and the world as nations try to limit the spread of the Covid-19 coronavirus.

Belgium extends road season but a 2020 Tour of Flanders 'unlikely'

All the Velon teams and some of their riders quickly confirmed their participation, suggesting the 'The Digital Swiss 5' could be the most prestigious eSport race ever held. Invitations have been sent to all the teams who are scheduled to race in this year’s Tour de Suisse.

"These are difficult times for everyone at the moment and this is a really cool way for us to interact with our fans and race when standard racing is not possible. I personally am really looking forward to watching and maybe even racing myself," Michael Matthews of Team Sunweb said in the Velon announcement.

"I was looking forward to racing again, but obviously this is uncertain at the moment," said Bauke Mollema (Trek-Segafredo).

"To stay in shape and keep competitive form, I am riding a lot of hours on our Saris Smart Trainer but I’ve never actually participated in a virtual race. It seems like a great way to stay fit and test my condition against other pro riders."

Velon has been locked in an often bitter power struggle with the UCI and some race organisers and has recently submitted an anti-trust complaint to the European Commission, accusing the UCI of using its regulatory powers for its own commercial benefit and to take the rights of the teams and riders without consultation.  Velon created the Hammer Race series and has often produced onboard video content from races it partners with.

The Rouvy platform uses real life video footage of the roads, while riders are represented by 3D avatars wearing their team kit and riding their own team’s bikes.

Velon will announce how racing can watched remotely, but said television viewers in Switzerland will be able to watch live via the Swiss national broadcaster SRF. The riders' live data - speed, power and cadence - will be displayed, continuing the work done by Velon. Some of the riders will have webcams in place, so viewers can see their faces as they race.